Millions of people search for mushrooms on a daily basis around the world. Numbers vary, but scientists estimate that more than 50,000 species of fungus exist on the planet and that number has one very scary fact attached to it. Those considered edible make up but a tiny fraction of those.

Many people forage for their own mushrooms. The chance of mistaking one for a closely-resembling poison relative are very possible. Eating a poison mushroom variety has some pretty unpleasant side-effects, the worst of which is death itself. 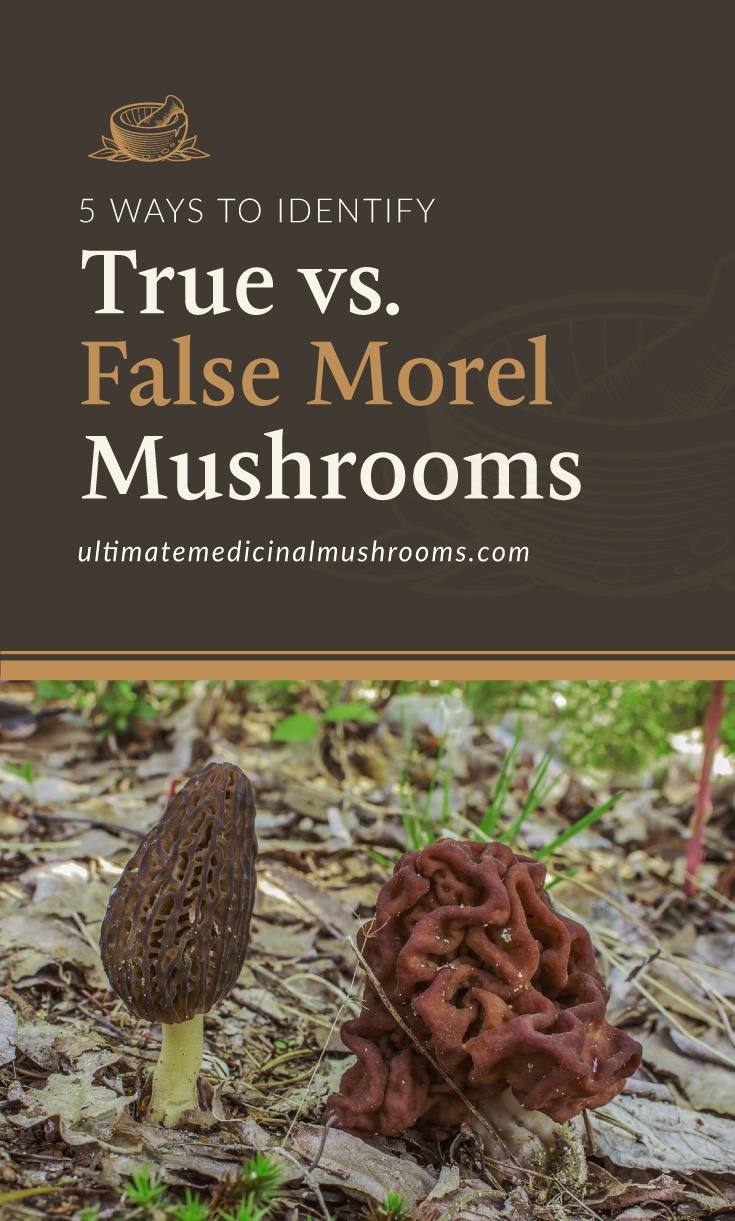 Identifying the more popular varieties isn’t without its own risks, so it pays to know the differences between the popular mushrooms and the nasty cousins you’ll want to avoid. One variety that sits high on the list for many is the Morel, its cousin, the false morel mushroom, a similar looking fungus.

Also called Sponge Morel, True Morel, Yellow Morel and Common Morel, this species of fungus is considered by many to be the most prized of edible mushrooms.

The Morel is difficult to cultivate, its availability limited to commercial harvesting of the mushroom from the wild.

Gourmet chefs prize the variety for their distinct flavors and appearance. Although they are highly sought after, make sure to learn correct Morel mushroom identification before heading out.

Where do Morels grow?

The Morel prefers the more temperate zones of the Northern Hemisphere. It grows abundantly in North America, India, Pakistan, the Himalayas, Turkey and China.

Scientists have identified more than 80 individual species of Morels, highlighting the need to take care when harvesting your own. But even those numbers are only an estimate, the true number a hotly-debated topic.

China recently developed ways to farm Morels commercially, but whether they compare to the true wild-grown mushrooms is still unanswered.

Do farmed salmon taste as good as those caught in the wild? Most of the Morels found in stores today, are there because of dedicated foragers who spend countless days and weeks searching for them.

Things to know before heading out to forage your own

Foraging for mushrooms is OK in most locations, but you should avoid hunting for them in others. The following are some of the places you will want to stay away from for the reasons listed-

Orchards or Farms: Most commercial farms use both pesticides and herbicides on their produce. While they may be organic, don’t risk it unless you know for sure. Chemicals sprayed on plants and trees end up in the soil and in the mushrooms themselves.

Road Side: Not only is the traffic hazardous, but chemicals sprayed on roadside undergrowth is toxic.

Industrial Areas: Same as above, the unknown chemicals possibly toxic.

If you intend to forage further away from the urban center, pack some preventative aids as well as your normal bits and pieces. Water, cell phone and a first aid kit are important inclusions. And don’t forget about any wildlife that lives where you are foraging.

The equipment you will want

Slice the morel instead of plucking them. Despite the stem being totally edible, you want to avoid dirt and grit that could end up on your prize. Carry a good-quality knife with you, one that sits on your belt, making it easily accessible.

A bucket to store your prizes in, but drill some holes into it so the mushrooms breathe. Another often encouraged container is a basket with plenty of holes in the base. This will release spores from the Morel, spreading them to other areas and encourage the species to grow.

How to distinguish the prized morel from false morel mushrooms

Now that you have your equipment ready, it’s time to learn how to identify morel mushrooms when searching for this delicacy.

There are several species that look similar to true morels, including false morel mushrooms, which are toxic. The two main parts that identify the morel are the outside and the inside.

Step #1: Look for the honeycomb

The outside of the cap of morels is honeycomb in appearance. The color varies dramatically, from golden blonde to gray, the Black Morel having black edges of the hollow comb. 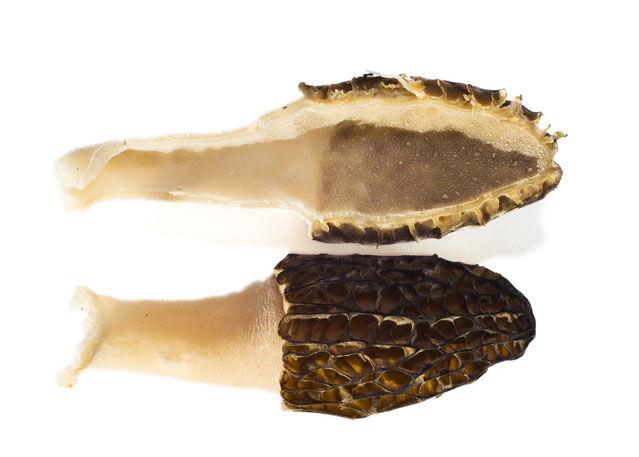 Step #2: The inside is hollow

Take your knife and slice the cap open from top to bottom. The inside of a true morel is hollow. It’s hollow, all the way through, including where it joins the stem. False morel mushrooms are not hollow.

Step #3: See how the cap is attached to the stem

The cap of a true morel attaches directly to the stem. Other varieties will have different attach points, hence why this is a great identifier of the real thing. A half-free morel, also edible, attaches to the stem half-way along the cap, the other half of it hanging.

Step #4: The cap is longer than the stem

Morel caps are almost always longer than the stem. I say almost because again, the half-free morel can be the exception. You’ll find the morel to appear tall and uniform, unlike some other varieties that look quite irregular.

If you still have any doubts, a simple overnight test will soon dispel the last remaining ones. Get a dark sheet of paper, preferably black.

Place your morel on it and get a jar, glass or something to place over it. Make sure no wind penetrates under it, otherwise the test won’t work.

Leave the mushroom underneath the cover overnight. Spores from a True Morel are creamy colored, light in appearance. If you see the spores on the black paper, then you have yourself a true morel.

Morel look-a-likes, or false morel mushrooms as they’re known, have a number of identifiers. Unlike true morels, false ones look like they’re bulging out, have quite an irregular appearance and are lobed.

The stem attaches to the very top of the cap, so slice it open to make sure. Remember, true morels are hollow inside. The overall appearance tells you that it isn’t a morel.

But if you have any doubts at all, discard the mushroom immediately, rather than risk the consequences.

The final things to consider

Use common sense when seeking advice on the internet. Consumed mushrooms have some pretty serious side-effects, especially for people sensitive to them. Always start with a small amount and wait until you are sure the fungus doesn’t affect you.

Never eat a morel raw. They are extremely delicious served with butter salt and pepper; their nutty earthy flavor craved by restaurants around the world. But morels contain a toxin destroyed during the cooking process.

These toxins affect people when consumed raw, and the best thing to do is wait until you have them fried up and ready to serve.

Because of the number of varieties of mushrooms that exist, always be 100% sure before eating any. Too many cases of severe reactions to mushrooms are reported every year and the effects vary from person to person.

What may affect one may not always affect another. Use your own better judgment when choosing which mushrooms to eat and enjoy the amazing qualities these plants offer us.

Check out this link to learn more about poisonous mushrooms as well as how to avoid them: 4 Common Poisonous Mushrooms You Need to Know 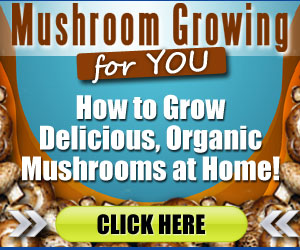