I will never forget a saying my grandmother taught me when I first started mushroom hunting. It came about the first time I spotted poisonous mushrooms. She told me that there were some nasty mushrooms which kill people if eaten. “When in doubt, throw it out,” she would often remind me, and always whenever we were out hunting.

It is a saying I still hold very close to my heart, not only because it was a piece of advice she had taught me, but also because of how true the saying is. There are some very toxic varieties of mushrooms and many people suffer because they failed to heed the advice given by so many. 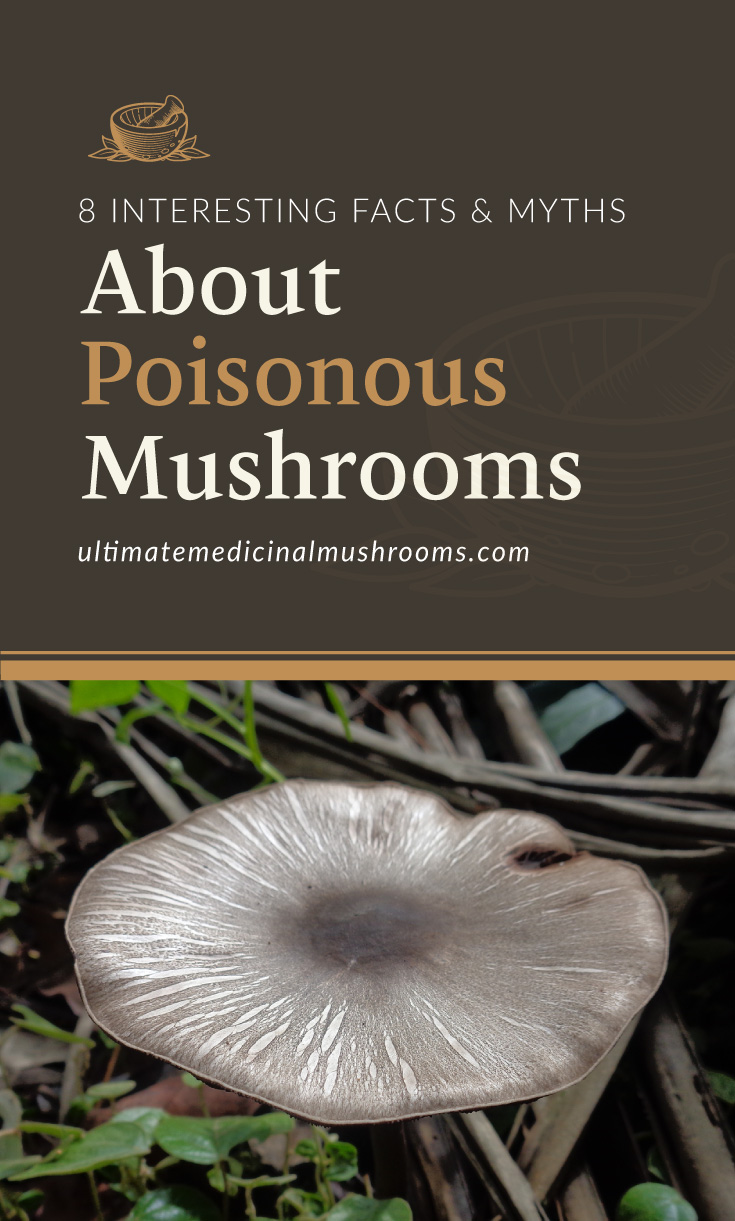 In this article, I hope to share some common facts that are worth noting, as well as some myths that people still believe. Some might surprise you, while others may just be the key to saving your life.

What Are Some Varieties of Poisonous Mushrooms?

If you didn’t know, it’s interesting to note that mushrooms are neither plant or a strange animal. They are in fact part of the Fungi Kingdom, a vast group of organisms that contain many different forms, including mold, mildew, mushrooms and more.

Scientists claim to have discovered around 50,000 types of fungi in the world. Of these, edible mushrooms number just 2000.

That leaves an awful number of fungi that aren’t edible. There are many poisonous mushrooms, some of which look very similar to edible mushrooms.

You can identify most poisonous mushrooms, others not so much. Those are the ones you have to be mindful of. They can show up in very unlikely places, the worst of which is your foraging basket.

Those are just some of the worst mushrooms that you might encounter during your mushroom hunting. Poisonous mushroom identification is one of the most important skills any mushroom hunter must learn, regardless of how often they hunt.

The types of poisonous mushrooms found in the list above will show no mercy if eaten, some toxic enough to kill you. For this reason alone, please, never consider what you find on the internet as information to live by. Nature will always prove us wrong, so take care to make sure you know what you eat.

This article is only a guide, so don’t rely on it alone. Make sure you take care when foraging and always identify the mushrooms you find before eating them. Like my grandmother used to say, “When in doubt, throw it out.”

How to Identify Poisonous Mushrooms

Because of the number of poisonous mushrooms that exist, a complete list is almost impossible. Neither is a brief list to help you identify them. But taking the following precautions will lessen the chances of you accidentally eating one.

If there was an easy way to remember which mushrooms were poisonous and which were edible, no one would ever get hurt. But there isn’t, which means you have to identify each individual mushroom you find and make sure it isn’t toxic. The only way to be sure that you can eat your find is to eliminate the possibilities.

One good way is to keep a small pocket-guide with you when out hunting. Although it might be cumbersome to carry, it’s better to have it in case you need it. Another great option is to download some pictures onto your cell phone. That way you will still have access to the photos, regardless if you have service or not.

If you have the means, you could always ask an experienced forager to accompany you on your hunt. That way you will still forage for mushrooms, but with the peace of mind that someone experienced is watching your back. Experienced guides know how to identify a poisonous mushroom, their knowledge normally coming from years of experience.

Some Things to Keep in Mind

Because there is no single method for telling the edible and the poisonous mushroom varieties apart, I try and pass on 3 key rules to use when out foraging. I think of them as the 3 golden rules of mushroom hunting. They aren’t perfect, but they will lessen the chances of you eating poisonous mushrooms by mistake.

One bad thing about these rules is that they will also stop you eating some delicious varieties, but when dicing with death, there is no chance worth taking. I’m sure you’ll agree that missing out on a few edible types and being alive is far better than sampling everything and ending up dead.

Rule #1: Check the Gills and Stems

If your mushroom has white gills, throw it away. If it has a skirt or ring on the stem and a bulbous base, also avoid it. Mushrooms from the Amanita family can be deadly, so my advice is to give them a wide berth.

If you see the color red on the cap or stem, also avoid picking it. Yes, it will mean missing out on certain edible varieties, but you will also avoid the toxic ones.

NEVER eat a mushroom unless you are 100% positive you know what that mushroom is. If there is even the slightest doubt…remember my grandmother. “When in doubt, throw it out.”

8 Facts to Consider When Foraging

It’s better to arm yourself with a list of facts, rather than myths which are often nothing more than silly sayings. The more facts you know, the easier your mushroom hunting will be and the safer your food is.

The following facts are a set of questions that you can ask yourself, to help you better identify the mushroom growing before you. While size and shape might not always be a definite answer, other traits and situations will add weight to the final answer. All you need to do is know which questions to ask.

Fact #1: Where is the mushroom growing?

Certain mushrooms will only grow on trees, grassland, attached to dead logs or roots. Others grow in the middle of a path and some right by your suburban house. Take note of where it is located to help identify it.

Fact #2: What are its basic features?

Does the mushroom have a distinct shape, color or a certain texture? Certain poisonous mushrooms will look similar to edible varieties but will have other characteristics that set them apart.

Some mushrooms have a very specific type of smell, while others may not. There are mushroom poisonous to dogs, drawing the animals in because of their distinct smell.

Fact #4: What does the mushroom have distinctive features?

Look at the underside of the cap and see if it has gills, spikes or even pores. Is the cap attached to the stem or is it just hanging?

Consider the time of year you are out hunting. Morel mushrooms only grow in the spring, so why is there one growing in November?

Some poisonous mushrooms will have a distinctive flesh, very different to edible varieties.

Is the mushroom growing in a cluster, a circle or alone? Know how the edible ones grow before picking up a bad one.

If you touch the mushroom, does it bruise? Does the color of it change? Take some precautionary tests and make sure.

Busting the Myths on Poisonous Mushrooms

While many of the questions above are great facts to consider, the myths will often end in pain and heartache. I have seen and heard many myths about how to identify poisonous mushrooms and I can guarantee that many of them are not true.

Some of the myths I’ve heard sound so realistic that I can see how easily they confuse people. If there is one simple way for me to deal with them it’s this: use common sense. If you use common sense with anything, I guarantee you will soon see through a lot of these fake facts. Just writing them now makes me wonder how anybody could invent things like this.

Wrong. Many poisonous mushrooms have caps with peel. The Death Cap, one of the most toxic mushrooms on the planet is able to be peeled.

Wrong. Many poisonous mushrooms exist that are only toxic to humans. There are also foods in the wild that are toxic to animals and not us. It all just depends on the genetic makeup of the specific fungus.

The Death Cap, featuring on so many lists, is a highly toxic fungus that has a very distinctive fishy smell. This is what attracts dogs to it, and makes it one of the most poisonous mushrooms for dogs.

Wrong. Many poisonous varieties grow on trees, one example of this being the Jack O’Lantern. It has a very similar appearance to Chanterelles, although it has a couple of differences worth knowing.

Myth #4: “All white mushrooms are safe to eat”

This is probably, by far, the most dangerous lie I have ever heard. Many poisonous mushrooms are white, with many more white fungi also edible. White is a very common color with fungus and as such, shouldn’t be used to distinguish poison from edible.

Death Caps and Destroying Angels are just two examples of poisonous mushrooms that have killed people with their toxins. Color alone is not a defining trait.

Myth #5: “All poisonous mushrooms have a pointed cap”

Again, not true. Although they might feel picked on, the Death Cap and Jack O’Lantern are 2 examples that don’t have pointed caps. It is a silly myth with no factual backing. Always use pictures of poisonous varieties to confirm their identity, or use an experienced guide.

Ask the unfortunate people that have eaten Amanita mushrooms whether the taste repulsed them. People that are poisoned by this variety say the mushroom tasted delicious. The truth is, poisonous mushrooms have different tastes. They aren’t all bitter or sour or tart.

Another untrue myth that is ridiculous to even consider. Many poisonous mushrooms act as hosts for many insects and their larvae, including the dreaded Death Cap. Humans are sensitive to some of nature’s creations while other creatures are not.

Myth #8: “Any mushroom is safe once cooked”

While this may be true for some, like false morels, it isn’t for others. For the most part, the cooking process doesn’t break the toxins down. If you come across a Death Cap, my advice is to steer as far away as possible. Never consider cooking one up.

The Final Say on Poisonous Myths

Myths are just that, myths. They aren’t fact and as such,  avoid them like the plague. Nothing beats facts and good old-fashioned experience. If you are inexperienced and looking to turn mushroom hunting into a long-term adventure, my suggestion is to start by learning the facts.

There is too much at stake when dealing with something that has claimed many lives, Poisonous mushrooms have no sympathy, they show no remorse. If you eat one, then you will suffer the consequences. I’m not trying to scare you, just simply give you the truth. While mushroom hunting really is one of those fun and exciting hobbies, there are important elements you need to learn.