The best way to maintain a healthy lifestyle is to start with an active brain. Brain boosting mushrooms are one of the best sources of nutrients to achieve this.

Mushrooms are neither a fruit nor a plant, a fact foreign to the many people who consume them. They are in fact a type of fungus, one with incredible health benefits when consumed.

Although the term fungus may deter some from their unique flavors, it’s their nutritional value that will surprise many. Here are 3 mushrooms that will boost your brain activity.

The Lion’s Mane is a very enchanting looking fungus. The mushroom takes its name for it’s remarkably similar appearance to that of a real lion’s mane. When you see these in a big bunch, they also tend to resemble a pile of snowballs.

This fungus is native to North America, Europe, and Asia.

The Lion’s Mane mushroom has such an array of medical benefits that it is difficult to list all of them here. Because of its beneficial effects, it is used both as a medicinal mushroom as well as an edible mushroom.

Research into the many purported health benefits of Lion’s Mane has been limited, however, some initial studies have already proven its highly positive effects on health.

It is a mushroom that is very beneficial to cancer patients, used for fighting off leukemia cells and shrinking the size of colon tumors.

In addition, the lion’s mane is also great for people with dementia as it may increase their cognitive functions.

Similarly, it has a positive effect on those who suffer from depression by reducing anxiety and irritability.

Finally, Lion’s Mane is good for the heart by preventing the chances of future heart disease and acts as an anti-inflammatory substance.

As an edible food, this mushroom promotes good functionality of the digestive system. If you do decide to cook it, do so on a lower heat setting.

Lion’s Mane mushrooms have a very high water content, so this will provide enough time to evaporate away the liquid and give it a more crunchier texture.

Reishi is another mushroom with a very long list of benefits. It resembles the shape of a kidney, or a lady’s fan and has a red varnish appearance.

This oddly-shaped fungus is native to North America, China, and Japan.

Reishi mushrooms, like Lion’s Mane, may also potentially reduce the size of tumors, as well as protect against cognitive diseases – Alzheimer’s the most common one.

If you’ve heard the saying “Big things come in small packages”, the Reishi mushroom is what they were talking about.

The many health benefits contained within such a tiny package is truly remarkable. It can lower your blood pressure, keep your blood sugar levels stabilized, and regulate your body’s sleep cycle.

As a bonus, it also contributes to the regeneration of liver cells.

The Reishi mushroom is not eaten like other mushroom varieties in a common or traditional way as its bitter taste remains after cooking.

But, if you do decide to cook a meal with Reishi as an ingredient, make sure to sauté them in just a small amount of oil or butter. This will make it taste a little less bitter than it normally does.

Otherwise, take Reishi as an extract or add the powder to your food and drinks.

You may not want to eat Cordyceps because of their extraordinary appearance. However, you may reconsider this once you learn of the remarkable healing properties they contain.

This mushroom is native to certain Asian countries, such as Japan, where you will usually find them on the larvae of caterpillars.

Having an extensive history in Chinese medicine, Cordyceps is used for a wide variety of medical conditions, a popular choice for treating many conditions.

Some of the conditions Cordyceps are used to treat include increasing sex drive, reducing fatigue and kidney disease. It also has cancer-fighting properties due to its high levels of antioxidants.

Even in today’s modern world, Cordyceps mushroom is still current with its many benefits. One of these is to increase the body’s VO2 max, which results in a better workout.

Furthermore, Cordyceps can also mimic the role of insulin, so it is very useful for those who are diabetic – a condition that is becoming increasingly common in today’s society. 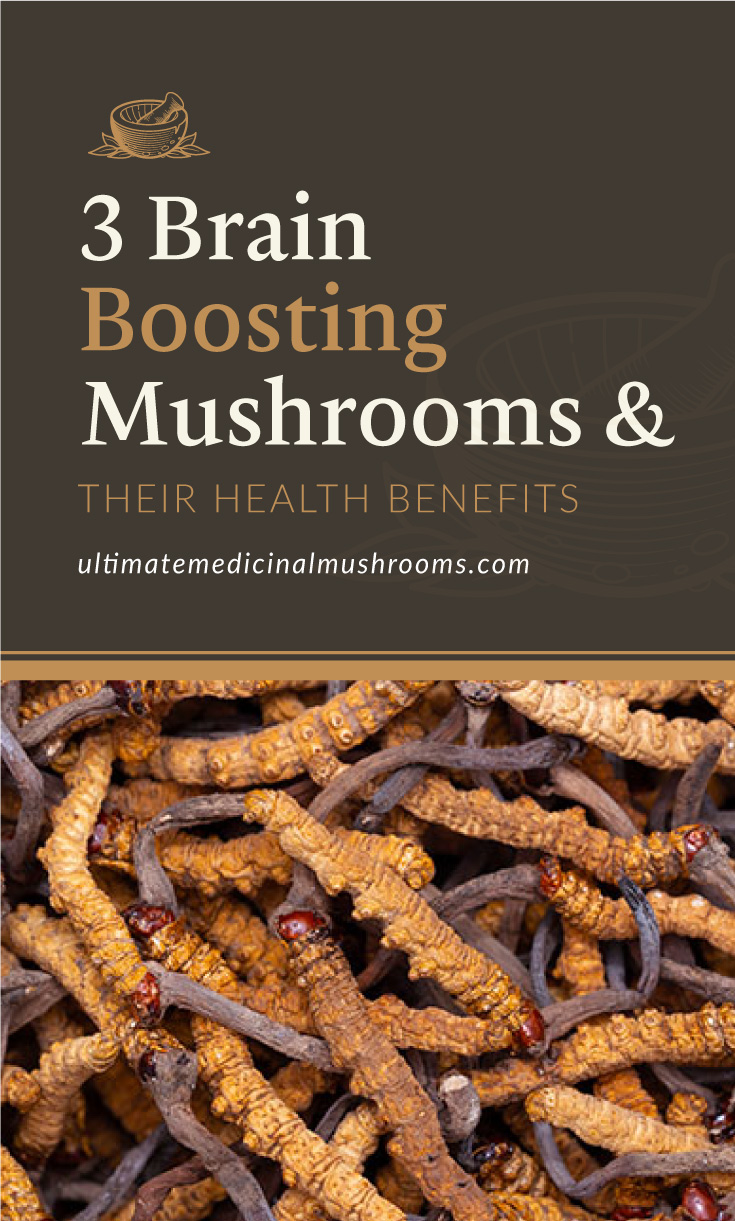 People consume cordyceps typically as a supplement. You may find the price a little higher than similar products due to the limited availability of the mushroom.

But, if you’re willing to take your health approach to the next level, then cordyceps is certainly worth the investment.

These 3 brain-boosting mushrooms are the perfect ingredients to add to your recipes or diet plan.

If the taste of mushrooms isn’t high on your preference list, try adding their powdered form to your meals. The flavors will be a lot finer, while still providing you with all the health benefits they contain.

Remember, the health benefits for the long term far outweigh the taste in the short term.

You might find this article about cooking medicinal mushrooms interesting: 5 Cooking Medicinal Mushrooms You Can Use at Home.