Ever heard of the turkey tail mushroom benefits? If you haven’t, it may be time to include this mushroom in your diet. Mushrooms have many functional and medicinal benefits, and turkey tail is one of the most powerful ones.

Improve your nutrition, get better sleep, feel more energized, and have a stronger body, with turkey tail in your daily diet.

What is the turkey tail mushroom? 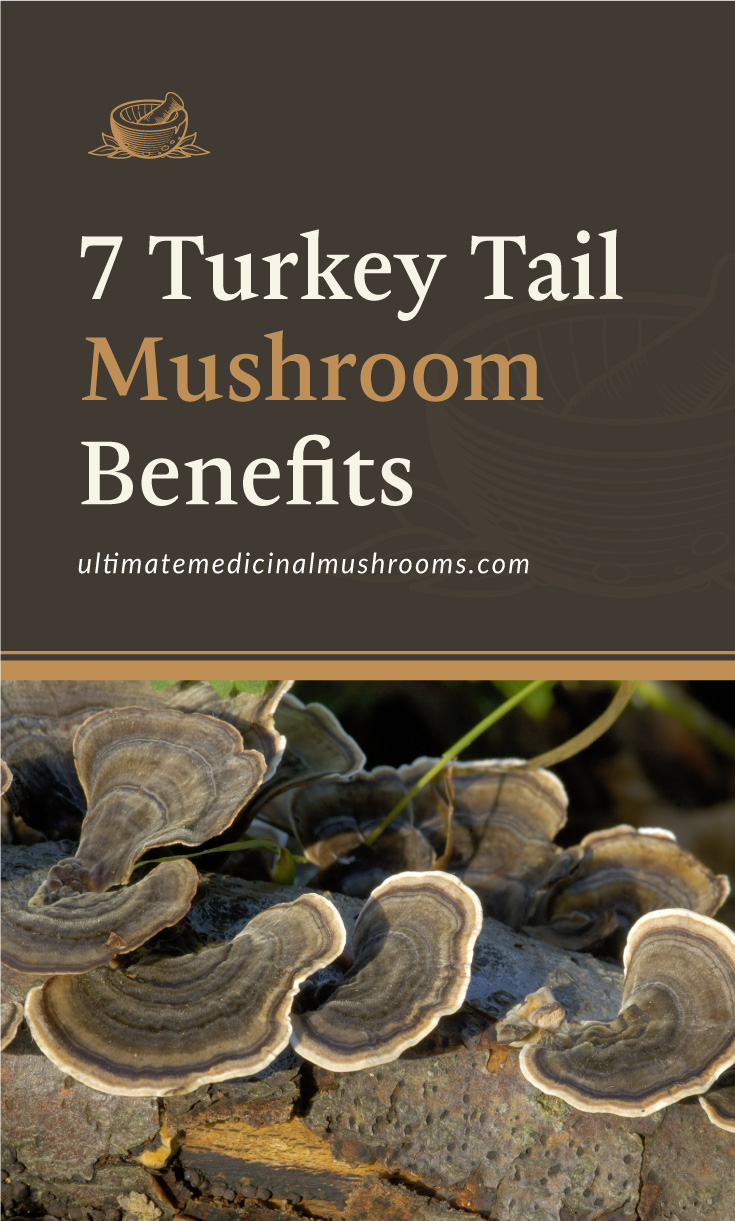 Turkey Tail is a polypore mushroom that gets its name from its shape and colors. They also resemble a turkey tail. This type of mushroom grows in clusters on dead trees and wood. The colors resemble brown, tan, gray and white. The Japanese often call it a kawaritake, or cloud mushroom, because it resembles clouds.

For many years, turkey tail has been used as part of Chinese medicine thanks to its immune-modulating properties that help fight infection and disease. Whether it is as part of a meal, or in a tea, this mushroom can be extremely helpful for you.

These are the 7 turkey tail mushroom benefits:

Benefit #1: It has potent natural polysaccharides

This mushroom also contains the polysaccharide peptide (PSP). PSP is another polysaccharide, able to modulate inflammatory responses at the cellular level.

Benefit #2: It contains lots of antioxidants

Aside from polysaccharides, this mushroom also contains antioxidants that can promote a better immune system, preventing oxidative damage and inflammation as well. Some of the antioxidants in turkey tail include flavonoids and over 35 phenols.

Benefit #3: It is a prebiotic food

While helping in modulating your immune system, turkey tail is also a great prebiotic food. A prebiotic is a type of food or nutrient that promotes healthy bacterial growth in your gut.

The gut contains something called a microbiome, which is mostly microorganisms that help regulate everything that happens in your gastrointestinal tract.

These microorganisms help break down, digest, and absorb nutrients. In some cases, though, the microbiome can suffer, whether it is due to a bad diet, excessive use of antibiotics, or chronic illness.

In these cases, you may benefit from consuming turkey tail, as it can promote a healthier microbiome. Prebiotics are a great way to maintain a healthy gut, one that moves things along, absorbs nutrients, and can even promote better feelings.

Benefit #4: It may be able to suppress tumor growth and prevent cancer

Those that consume turkey tail mushrooms often have a healthier diet, so it can help prevent cancer. However, this same mushroom is also thought to have anti-tumor properties. Some studies showed that the polysaccharide PSK in turkey tail inhibited the growth of colon cancer cells in humans.

Other more recent studies have also shown that another polysaccharide in turkey tail, known as Coriolus Versicolor Glucan (CVG), can also suppress tumors.

These polysaccharides also have immune-modulating properties that, along with tumor suppression properties, could have a protective effect for people, but also deter cancer growth and spread.

The turkey tail has also been studied because of its effects as an immune-modulating compound and antioxidant, which has led to many people consuming this mushroom during their chemotherapy treatment.

These studies have shown that taking 1 to 3 grams of turkey tail mushroom every day, improved survival rates as compared to those that didn’t consume it.

The study was particularly relevant in patients suffering from breast cancer, stomach cancer, and colon cancer. Those participants that consumed turkey tail during their chemotherapy treatment saw a 9% reduction in mortality rates.

Benefit #6: It can prevent obesity

Some research on turkey tail mushrooms also shows promising results on the protein-bound beta-glucans that they have. These compounds are known to prevent cholesterol absorption by binding to it and removing it from the body through bile.

These same compounds also balance out the bacteria present in the gut, which can also help improve metabolism and could lead to weight loss.

Benefit #7: It can act as anti-bacterial and anti-viral

Turkey tail mushroom has been used in studies for the prevention of bacterial growth and viral spread. It has been shown to inhibit the growth of the bacteria Staphylococcus aureus and Salmonella enterica.

At the same time, this mushroom has also been proven to control the symptoms of a chronic virus, with people experiencing a reduction of over 88% in viral symptoms when taking turkey tail.

Add turkey tail and take control of your health!

Along with a better diet and lifestyle, adding turkey tail as part of your balanced diet can be a great way to make your body stronger. Make sure you introduce these mushrooms, along with healthier habits, which can lead to better results.

What are you waiting for? Your health could improve significantly, take advantage of these Turkey tail mushroom benefits today!