The black trumpet mushroom, for me, is one of the more elusive to find. And that’s probably what makes it that much more special when you finally locate some. Because that’s what makes mushrooms special, isn’t it?

I wonder if Morel mushrooms would still be as highly sought after if they were available from any corner supermarket in whatever quantities you wanted.

Make something hard to find, give it a delightfully earthy flavor and then limit their growing time to a certain number of weeks per year and watch the forager’s mouths water with delight when they find some. 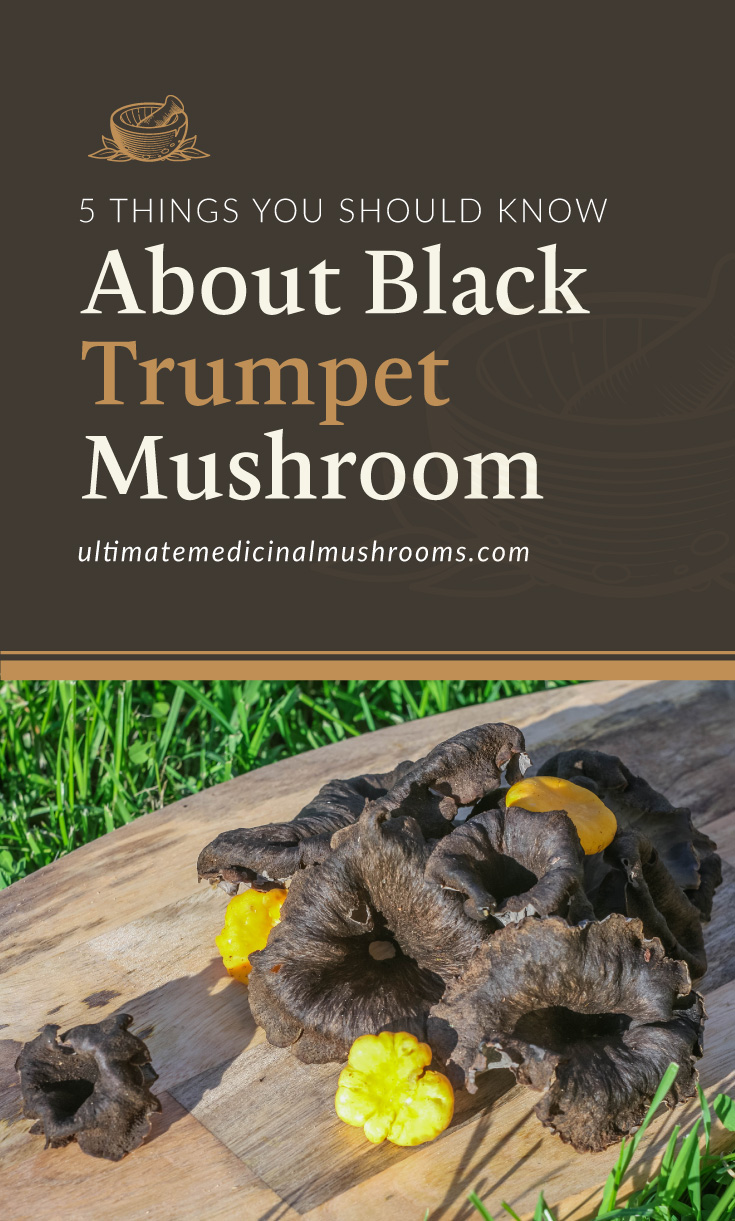 But there are quite a few things you’ll want to know when it comes to this delightfully appealing fungus. Listed below, I have put together a few things I think will help you find your own basket-load of black trumpet mushrooms. You just have to want to get out there and find them.

Things You Should Know About Black Trumpet Mushroom

Like any mushroom, especially ones that only grow wild, they have a specific time of year when they grow. Black mushroom season is from early summer until late fall.

In some states, like the warmer California, black trumpet mushroom season extends into early winter as well. It will just depend on the specific season each year.

Tip #2: How to Identify Them

Black trumpet mushrooms are one of the easiest identifiable mushrooms around. That is largely because of their very distinct shape. The tops of the mushroom cap normally flare out like a trumpet, with the edges curled out and around itself.

The edges look almost wavy in appearance. The underside of the cap is surprisingly smooth, with no gills or visible pores or teeth. The inner side may also appear slightly scaly.

The stem of the mushroom tapers upwards a few inches and is mostly the same color as the cap. One of the tell-tale signs of a black mushroom stem is that it is hollow.

The stem walls can be deceptively thin, so take care when picking some, as the stems don’t tolerate a lot of handling. They damage easily, so try to use a sharp mushroom knife when foraging for them.

Tip #3: Where to Find Black Trumpets

One of the most important things you will want to know is just where you will get your hands on some. Like I said before, people know these mushrooms to be one of the more elusive varieties.

That isn’t because they hide well. The reason people struggle to find them is that their color tends to blend well into the forest floor. Make sure you have your black trumpet-finding glasses on to spot some.

An interesting fact about black trumpet mushroom is that it is both saprotrophic (feeding on dead organisms) as well as mycorrhizal (symbiotic relationship with living organism).

This means you’ll find them growing near trees, but they don’t fruit on them. Look for them in hardwood forests, near beech and oak trees. It’s rare to find them at the base of trees.

One of the easier places to find some is on mossy patches. It’s because of their contrasting color to the moss that makes them easy to find there. Also hunt for them near gentle streams, as they prefer damp and dark areas.

The trick to finding some black trumpet mushroom is to look down as you walk. It might sound like an obvious thing to do, but because of their colors, these mushrooms blend into the background quite easily and many people miss them because of how well they blend.

Take the time to scan through leafy piles and don’t be afraid to get down and have a good hard look. They also tend to grow in clusters so, if you find one, there is a very good chance there will be more around.

The great thing with black trumpet mushrooms is that they don’t have very many varieties that look like them. This makes them another great choice for beginning mushroom hunters. While other varieties found in the wild have a tendency to mirror distant cousins that harbor toxic side-effects, black trumpets do not.

There is only one type of mushroom considered to be a black trumpet look-alike. That one is the Devil’s Urn. Despite the less than a flattering name, the devil’s urn is not toxic to humans, which means it’s a relief if choosing this by mistake. The devil’s urn isn’t as tasty as black trumpets and that is an easy giveaway.

The black trumpet mushroom is also named the ‘trumpet of death’, despite not being toxic, and also the ‘horn of plenty’. This name makes sense to me, considering the incredible depth of flavor, considered by many as the best tasting of all mushrooms. They are also called black chanterelles.