When you think of mushrooms, most people often associate the word with poisonous mushrooms.

Poisonous mushrooms can be very detrimental to your health and with some toxic enough to cause death.

This type of mushroom is very well deserving of its name. If you’ve heard of the saying, “Silent but deadly”, then this is the perfect description.

Once eaten, the symptoms don’t begin to show until a day or two later. Unfortunately the damage has already been done by then.

Initially, it can be quite confusing to work out just why you’re feeling the way you do. You did after all, eat it two days prior.

If you don’t seek immediate treatment, death cap mushrooms will kill you within a week.

The mushrooms are commonly found in urban areas and don’t share the typical deadly or poisonous appearance many of its cousins have.

These mushrooms have a silver head or cap and a pure white stem. They only grow close to the ground, under shrubs and bushes.

The Destroying Angel mushroom is actually related to the Death Cap mushroom and is just as deadly.

To add to their deadliness, they resemble a kind of edible mushroom called the Puffball mushroom. When foraging for Puffballs, or you find the mushroom while out walking, take extra care to identify them thoroughly.

Destroying Angels have a white bulbous cap and a thick stem.

One way to distinguish them from puffball mushrooms is by their white stem and gills under the cap (though not connected to the stem itself). In addition, they also have a broken membrane on the base of its stem .

This type of poisonous mushroom kills more people because of the difficulty dealing with their toxins.

After ingestion, the symptoms show within as few as five hours. During this time, the toxins slowly damage your kidneys and liver before symptoms begin to show.

Jack O’lantern mushrooms have quite a mesmerizing orange color, which explains its name.

Just like destroying angels, they too have gills under their cap and you can find them growing together in clusters.

Similar to the destroying angel mushroom, the Jack O’Lantern has an edible look-alike called the Chanterelle.

The difference between the two is that the Chanterelle only has a gill-like structure which doesn’t glow in the dark like Jack O’Lantern’s gills.

If you are out foraging in broad daylight, keep a dark container handy to check if they glow in the dark or not.

One positive note is that Jack O’Lanterns are much rarer than other poisonous mushrooms.

If you are a true mushroom connoisseur and like to use them as ingredients, you’ll more than likely love morels.

They can be tender, bursting with strong flavors, and can taste like a delicacy when sautéed well. Additionally, morels are one of the healthier mushrooms to eat, so there’s plenty to love about them.

But, the downside to the Morel mushroom is that it has a sister called false morel.

False morels look almost exactly like the “original” morels. It makes distinguishing them from each other extremely difficult. 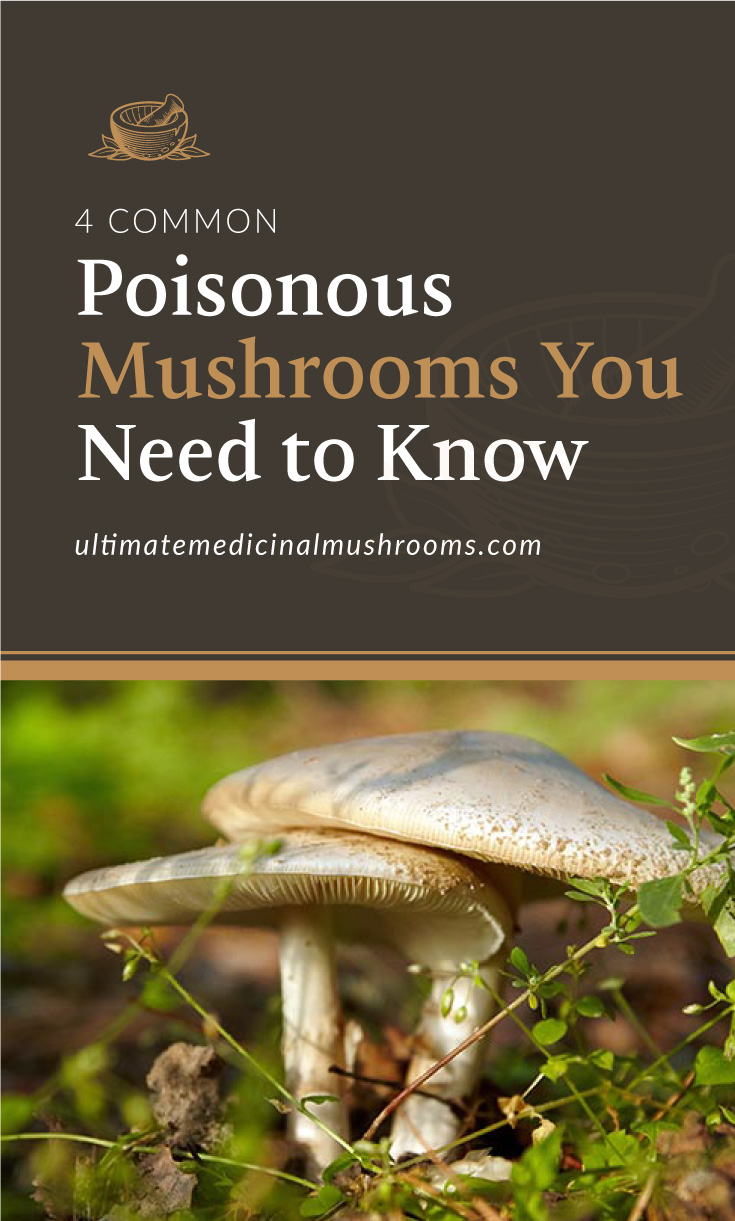 In fact, it is so hard to tell the difference that many people don’t bother comparing them at all, simply collecting them.

The good thing about false morels is that they are not as poisonous as other deadly mushrooms mentioned in this article. In fact, while they can be deadly when eaten raw, they are generally fine to eat once cooked. However, they do need to be thoroughly cooked in order to kill the toxins.

The main problem is that some false morels contain more poison than others. You never know which ones are more potent than others.

Furthermore, some individuals are more susceptible to the poison than others. So, even if a false morel has low poison properties, the individual might still be affected.

How to Avoid Poisonous Mushrooms

The best way to avoid ending up with poisonous mushrooms in your foraging basket, is to get a reputable guide for foraging mushrooms.

There are many quality guides for you to choose, however, ensure the one you select is relevant to the region or country where you live.

If you live in North America, you might find a suitable guide from the selection available from Amazon here: North American Mushroom Guides

The North American Guide to Common Poisonous Plants and Mushrooms is an excellent and very comprehensive guide if you would like to go all out. It can be purchased in hardcover or paperback form and is the perfect book to help you learn more about the different kinds of mushrooms (as well as plants) that are out there.

The guide contains over 300 names and also includes information on where you can find them.

Living in Europe? Here are some useful guides to mushroom foraging in Europe: European Mushroom Guides

If you’re looking to get into foraging for mushrooms as a part of your diet, or want to work on your mycology knowledge as a new hobby, then I’m sure you’ll find these handy resources very useful.

Hopefully, the 4 common poisonous mushrooms mentioned above are forever etched into your memory. Their names speak volumes on the damage they can do if ingested and hopefully, makes remembering them a little easier.

As you learn to recognize these types of mushrooms while foraging for your favorite ingredients in the wild, you’ll feel much more confident in your mushroom hunting.