There are many mushrooms that people think of when it comes to delicious recipes. And while some prove more popular than others, they each seem to have this irresistible hold over us. Cooking chicken of the woods is one such example, the mushroom not one of the mainstream varieties, yet still unbelievably popular with those who know it.

The spot on which the fungus grows becomes rotten and brittle, often to the point of deteriorating the wood until the tree breaks. It then continues to grow on the tree, feeding off the nutrients as the wood rots away.

It’s not unusual, most edible mushrooms falling into one of 4 categories. These categories define where a mushroom grows, making them easier to find for those actively hunting them. But knowing where to look is just part of the puzzle. You’ll also need to know where exactly to look and when to go looking for them. 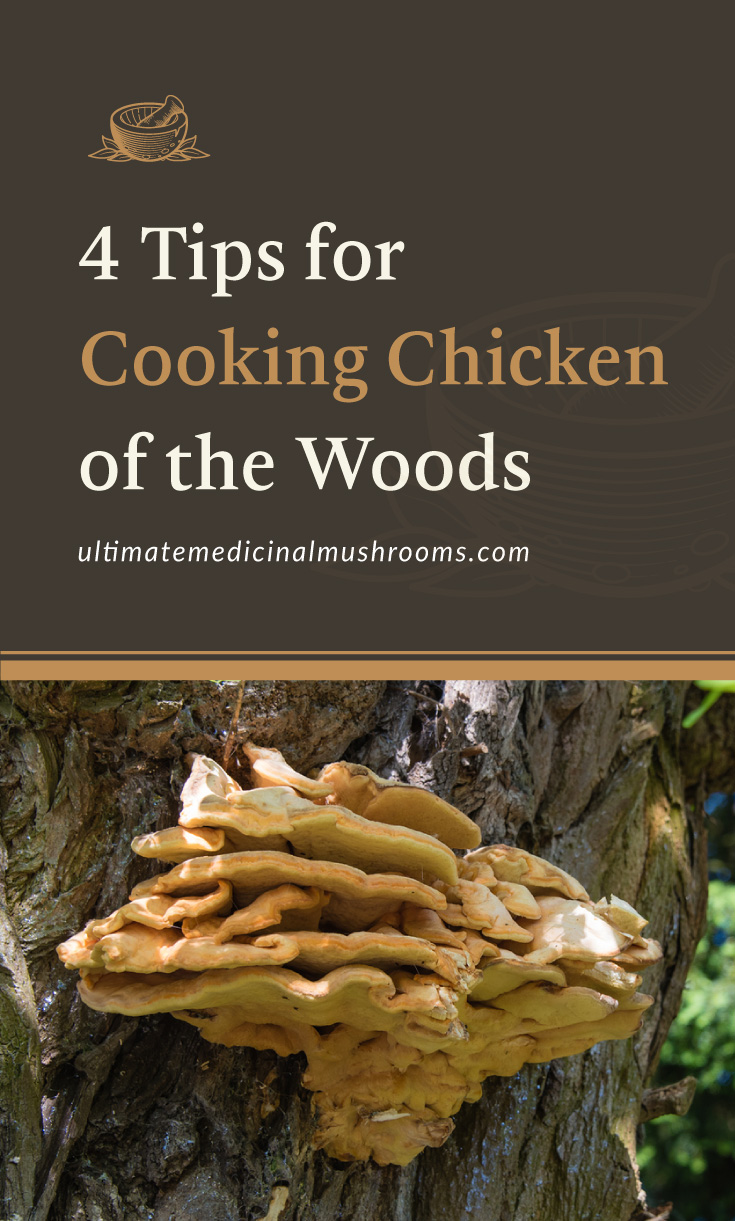 Finding the Chicken of the Woods

The chicken of the woods is not a commercially-grown mushroom and that means you won’t find them in regular supermarkets. If you are not keen going out hunting for them personally, look for them in specialty grocery stores, farmer’s markets or the goodwill of local mushroom hunters. If you are keen to find them yourself, continue reading.

While many other edible mushrooms have toxic cousins that look close to them, like true morels and false morels, the chicken of the woods does not. It has a very distinctive appearance that’s vastly different to the usual ‘mushroom shape’.

Look for long brackets growing near the base of trees. Avoid the ones growing on eucalyptus or conifers, as they contain toxins from the tree. Go for oak, cherry or beech. They have a sulfur-yellow to orange appearance and grow up to 10 inches across.

Tips for Cooking Chicken of the Woods

The wonderful thing about cooking chicken of the woods is that it tastes just like chicken, with a hint of lemon, itself a classic combination. But the taste is only part of it, the texture also similar to the bird itself. The taste and texture are so close to the real thing that people have mistaken one for the other.

It’s hard to imagine that a mushroom could taste and feel the way a meat dish does, but here it is. Maybe that’s why chicken of the woods is so popular with new vegetarians. The following tips are worth noting if you plan to cook this delicious mushroom for your next meal.

Cleaning any mushroom found in the wild is a requirement. The underside of chicken of the woods is a soft and porous material, unlike the gills found on other varieties. It’s where the spores come from. Because the mushroom is like a giant sponge, washing them isn’t really advised. I prefer to wipe them down with a damp paper towel. This makes sure to remove dust and dirt from the mushroom, without soaking it full of water.

If you don’t plan to eat them immediately, store them in a paper bag in the fridge for up to a week. They store quite well for that period, but anymore is ill-advised. If you do plan to store them longer, freeze them instead after frying them up. Never freeze fresh chicken of the woods.

These would need an insanely large frying pan to cook. Plus, it’s much easier to deal with smaller pieces. Slice the mushroom up into manageable pieces and fry them in lots if need be.

Most mushrooms are nothing more than giant sponges, meaning they absorb any liquid they come in contact with. If you have never fried mushrooms before, take note. Always ensure the oil you fry them in is well heated. If the oil is too cold, the mushroom will simply absorb it and leave you needing to add more.

The chicken of the woods is a delightful creation, one truly unique in appearance, taste and texture. They offer some real variety when choosing an appropriate dish, replicating the bird almost completely.