There are so many mushroom varieties in the world that it’s hard to differentiate between them. There are some more commonly found in supermarkets while others only found by the most die-hard mushroom foragers. Thankfully, porcini mushrooms grow in abundance for the masses that appreciate their flavor and texture.

Porcini mushrooms are one of the few mushrooms that are not grown commercially. This means that the only way to get your hands on some is to either find them yourself, or rely on the kindness of others.

Mushrooms are part of the Fungi kingdom, a vast collection of organisms numbering in the millions. The number of mushrooms that exist in the world is around 50 000, but scientists often discover new varieties, adding to an ever-growing list.

While many toxic mushrooms exist, the number of edible mushrooms worth finding only number around 5% of the total that exist. That’s not a very appealing number, but then not all inedible mushrooms are toxic. 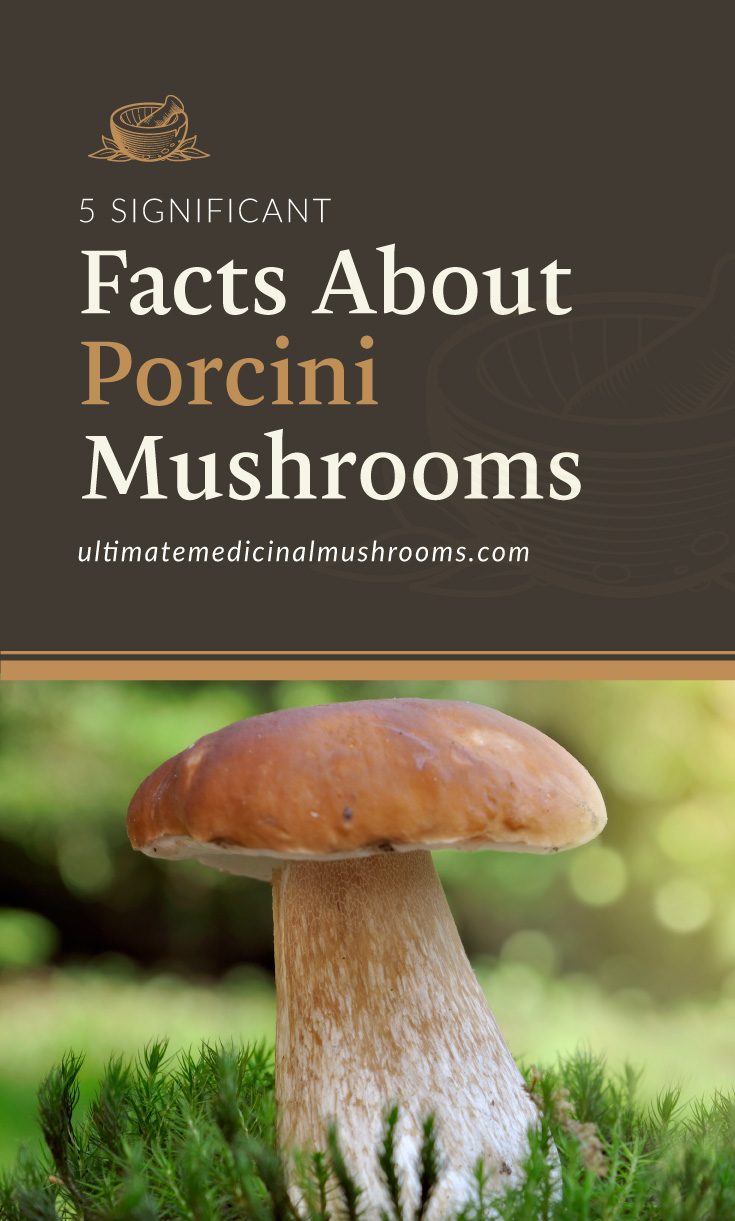 What Are Porcini Mushrooms?

Meaning ‘little piggy’ in Italian, Porcini mushrooms look very much like a poster-child mushroom. They resemble the classic shape of a mushroom and exist in many areas throughout the Northern Hemisphere. Because of their abundance throughout many countries, you will find porcini mushrooms in many classic dishes of a vast number of cultures.

In England, Porcinis are known as ‘penny buns’, while in Germany they call them ‘steinpilz’. Many countries know the distinctive mushroom, including Russia, Austria, Mexico, Holland, France and many more. But while the mushroom grows wildly across North America, Europe and Asia, the mushroom is an introduced species in Southern Africa, Brazil, Australia and New Zealand.

But whatever the name, the mushroom is the same, varying in height anywhere from 3 to 10 inches. The stems are rather large when compared to the cap, up to 3 inches thick and appear club-shaped. And speaking of the cap, porcini mushroom caps are anywhere from 3 inches to a full 12 inches wide when mature.

For those keen to find their own porcini mushrooms, its best to head out during their growing season. Thankfully, being one of the most popular wild-harvested mushrooms in the world, they aren’t limited to a single annual season like Morels.

The first Porcini mushroom season in the northern hemisphere is during the Spring, running through March and April. The second time you have a chance of bagging a few of these delicious mushrooms is during the fall, running between September through to November.

They grow singularly, but you may also find them in small clusters of 2 and 3 mushrooms. They love the forests, preferring to grow amongst landscapes dominated by pine trees, but will also grow amongst spruce, hemlock and fir trees. You might also find them amongst chestnut, chinquapin, beech and oak trees.

While many mushrooms add slight flavor to the dishes they create, porcini mushroom are one of the few with a distinct Unagi flavor. Just to clarify, Unagi is one of the 5 food descriptors, which include sweet, salty, bitter, sour and unagi.

Porcini have a distinctive earthy flavor that compliments many dishes. They possess a slight nutty undertone, yet rich and woodsy that is perfectly paired with steak, meatballs and many gravies. Because they stand up to a lot of other flavors, people use porcinis as a complimenting addition to many meals

The mushroom family have some pretty nasty members, some of which are toxic enough to kill. Confusion often comes from eating similar looking varieties mistakenly. Many mushroom hunters quickly learn to identify toxic varieties based on appearance, where they grow and some specific characteristics.

Mushrooms like the true morel, one of the world’s most sought-after mushrooms, have a distant cousin called a false morel, its appearance strikingly similar. The confusion between the two varieties often leads to people eating the toxic variety.

Some other mushrooms also have distant cousins, their similarities often confusing to the untrained eye. But thankfully, the Porcini is one of those varieties that stands almost alone.

I say almost because there are a couple of varieties remarkably similar. But you easily identify them for what they are, the Devil’s Bolete one of those culprits. You can easily tell the difference, as Devil’s Boletes have a red stem and when bruised, turn their flesh blue.

Fact #4: Porcini Have Many Health Benefits

Mushrooms as a whole have amazing health benefits, some of which still surprises researchers today. Many view mushroom varieties as miracle cures, used abundantly in Eastern medicine for millennia.

While modern science hasn’t yet caught up with many of the purported health benefits, research is growing and with it, evidence that mushrooms are a definite positive in anyone’s diet.

Porcini mushrooms contain no cholesterol, trans fats or saturated fats. This makes them popular with many people on diets, trying to lose weight. They also carry a high amount of fiber which helps with overall gut health and keeping you feeling fuller for longer.

A definite positive is the immune-boosting antioxidants in porcini mushrooms, perfect for those wanting to boost their immune system, or people recovering from illness who already have a depleted immune system. There’s also an excellent source of protein and iron in these mushrooms, perfect for vegetarians looking to incorporate a meat substitute.

Fact #5: Porcini Mushrooms in Other Forms

Many find Porcini mushrooms an irresistible addition to any pantry. Their wholesome appeal includes their incredible taste, wonderful texture and many health benefits. But only growing during 2 brief seasons throughout the year makes the mushroom extremely sought after.

Thankfully, there are other ways to obtain the mushrooms if fresh isn’t an option. There are a number of unique forms of porcini mushrooms, available for you to purchase year-round. These include-

Dried– These dehydrated porcini mushrooms are perfect for storing, for those times when fresh ones aren’t available. Re-hydrated, they are great for soups, stews and other meal ideas.

Powdered– dehydrated and crushed, use powdered versions in smoothies, yogurt, tea or however else you want.

Paste– A great way to experience the mushroom as a spread.

Canned– just like having the genuine thing. Canned goods store well for lengthy periods of time, perfect to use outside of porcini mushroom season.

Stock Cubes– these cubes work great added to soups and stews or just dissolved in a hot cup of water for a satisfying broth.

Mushrooms are a wonderful gift from Mother Nature. They are one of the world’s true superfoods. Modern Science still haven’t found their remarkable health qualities, but researchers are already finding that many of the myths surrounding these remarkable organisms hold some weight. But despite their health appeal, there’s no denying just how versatile mushrooms really are.

They make impressive additions to most meals, or even as a snack on their own. For me, there’s nothing quite as satisfying as a plate filled with a variety of mushrooms, freshly fried in some delicious butter, seasoned lightly with a sprinkling of good quality salt and cracked pepper.

It’s the kind of dish that always takes me back to my grandmother’s cabin, watching as she prepared the treasures we found on our latest hunt.