Many mushroom varieties grow wild, the benefits still largely unknown. But knowing just what the Chicken of the Woods Nutrition facts are, might help you understand what all the fuss is about.

Mushroom hunting is one of the last true connections with our food gathering ancestors. While many mushroom varieties exist on supermarket shelves around the world, some don’t, because they aren’t commercially grown.

A lot of mushroom varieties only grow in the wild. Despite many commercial growers desperately trying to crack the code to allow them to grow varieties at will, many species refuse to divulge their secrets. Take the humble Morel, a food connoisseur’s delight.

Despite being one of the most sought-after mushrooms on the planet, they are not grown commercially. Mushroom hunters spend countless days out in the field to find them.

Chicken of the woods is another variety not grown commercially. Keen mushroom hunters forage the forests of the world for the prized fungus. But while you might think that this is just another variety of mushroom, think again.

The chicken of the woods has some pretty unique characteristics that might surprise you. They are also the reasons they prove so popular with meat lovers and vegetarians alike. 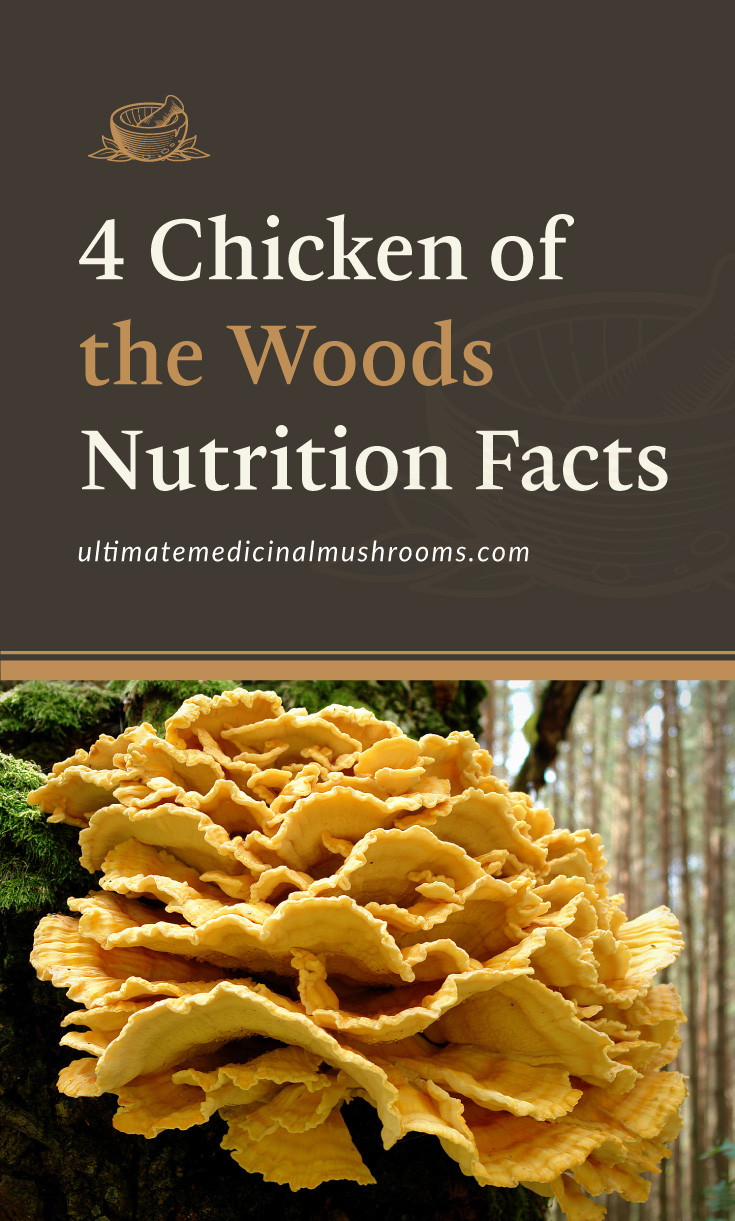 4 Chicken of the Woods Nutrition Facts

The mushroom tastes like fresh chicken breast, especially when fried in heated oil or butter, until golden brown. It also has a hint of lemon and that combination of chicken and lemon is a true classic in kitchens the world over. Imagine finding a fruiting organism, growing wild in nature, tasting exactly like a classic lemon chicken dish. And yet there it is.

The chicken of the woods season starts as early as late Spring, through Summer and sometimes as late as early Fall, although don’t leave finding them too long or you might miss out.

If you do find yourself at season’s end without having found a single sample, fear not. There are alternatives and they may just save the day. Firstly, you won’t find fresh chicken of the woods in supermarkets because the variety isn’t commercially grown.

Chicken of the woods nutrition makes the mushrooms perfect in more than just meals. Although eating them fried in luscious amounts of melted butter is one way to enjoy them, many cultures use the variety for a lot more than just a simple dinner dish.

While the mushroom is a true delicacy in America, in Germany and other parts of Europe, it is common to dry the mushroom first, then turn it into powder. Dry the mushroom either by air drying, in an oven or even a dedicated dehydrator. Once dried and turned into a powder, add it to flour and turn it into delicious variations of bread.

Russians see the chicken of the woods as a naturally-growing antibiotic and use the fungus to treat some medical conditions as well as boost the immunity system of sick people. A lot of other mushrooms hold similar properties, many used for medicinal purposes. Chicken of the mushroom is also a traditional snuff powder, used for centuries by Europeans.

Many mushrooms contain vast amounts of vitamins and minerals, making them one of the world’s true superfoods. Chicken of the woods nutrition shows that the mushrooms are just that, their make-up perfect for those looking for a healthy meal option.

One factor that they share with other medicinal mushrooms is the number of antioxidants they contain. Consuming antioxidants is one of the main ways to boost your immune system, particularly if you have already depleted it due to a recent bout of illness. Building your immune system has never been easier, with chicken of the woods ready to help your needs.

They also contain high amounts of protein, making the mushroom a great choice for vegetarians and meat eaters alike. The chicken of the woods contains around 14g of protein per 100g of mushroom. They are also naturally cholesterol free, a prefect choice to maintain health levels.

Then there are the vitamins and minerals in each mushroom. Aside from vast amounts of fiber, this mushroom variety also contains copper, potassium, magnesium and zinc. There are also a number of B vitamins, including folate which is great for expectant mothers.

If you are pregnant and looking for a healthy meal and have never tried chicken of the woods before, first ensure you can eat it. The mushroom can have adverse effects in some people, with rare instances of allergic reactions.

Simply rub some of the mushroom on the inside of your lip and wait an hour. If there’s no reaction, eat a small amount first to minimize any effects.

Here are some other options where to find the Mushroom

Option #1: Grow Your Own

With the advancement in technology, now is the time to turn yourself into a new-age mushroom farmer. All you need is one of these spore kits and you could be growing chicken of the woods in your own backyard before you know it.

From a nutritional point of view, growing your own is a sure-fire way to end up with the purest form of the mushroom because you know how it grew. Mushrooms are environmental vacuum cleaners, absorbing everything they come in contact with.

Harmful chemicals like herbicides and pesticides may live in the soil around a mushroom and if you didn’t know, would consume these when you eat your find.

Mushroom foragers and farmers sometimes sell their finds to local specialty stores or farmers markets, so keep your eye out. Many farmer’s markets open regularly around the country and it might pay to visit a few. Just keep in mind the appropriate time of year.

The chicken of the woods is one of those remarkable mushroom varieties, offering a truly unique culinary experience. The similarity between it and the bird itself is truly remarkable, completely interchangeable with each other.

Imagine the world if a commercially-grown variety of chicken of the woods was available to everybody year-round. It could have a remarkable effect on the environment as well as people’s health. That is enough reason to give this mushroom a try and experience it for yourself.

Now that you’ve read about how healthy this mushroom is, why not check out the 4 Tips for Cooking Chicken of the Woods?