Like the animals from the animal kingdom and plants from the plant kingdom, golden oyster mushrooms are incredibly diverse from their own fungi kingdom.

The sheer number of mushroom species is believed to be anywhere from 20,000 to 50,000. They harbor amazing secrets that we are still learning about today.

Given all the unbelievable healing benefits we know some species already hold, can you imagine all the things we are yet to discover? The mushrooms that we have proven to be edible and health-boosting for us, are a mere micro-fraction of the varieties we still have to discover.

One mushroom we do know a lot about is the golden oyster mushroom. Also called the yellow oyster mushroom, this little parcel of surprises has big taste and bigger benefits, not limited to its consumption. 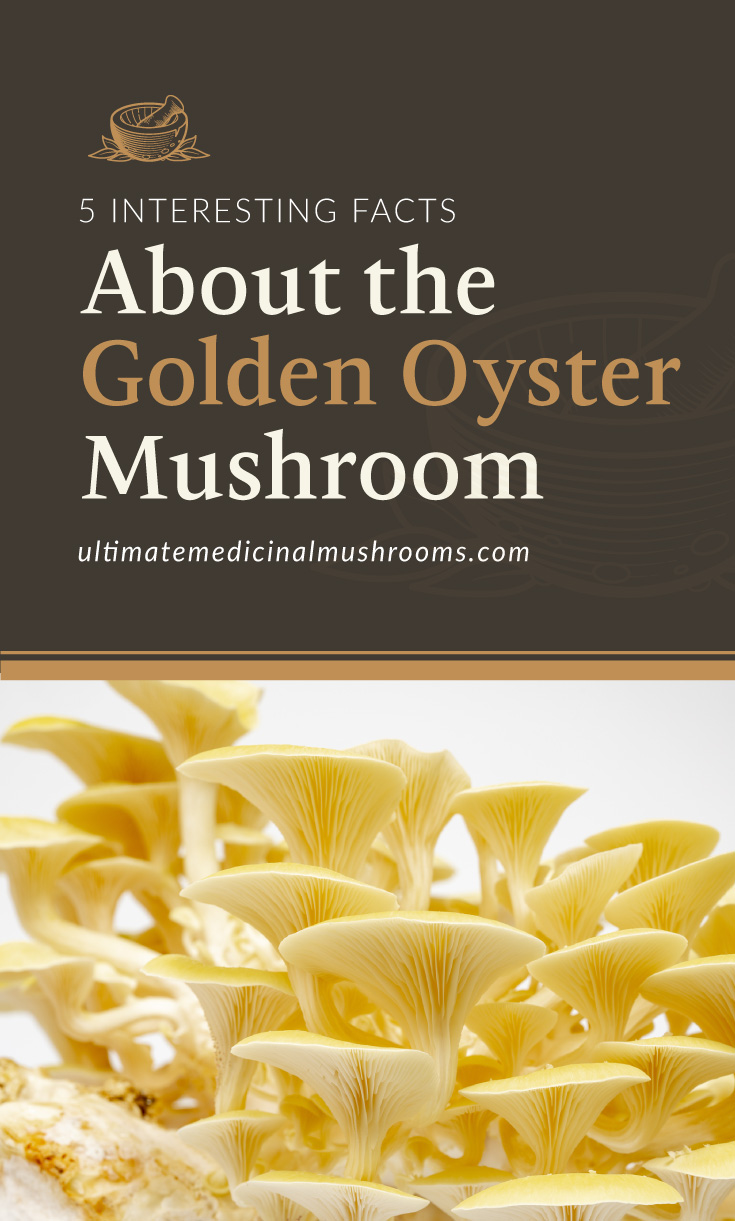 Where do Golden Oyster Mushrooms come from?

The fungus is native to Eastern Russia, Japan and the northern part of China, although some researchers insist it’s a close cousin of European varieties. The golden oyster has a long history, dating back to ancient times, used extensively in Chinese medicine for centuries.

The Golden Oyster mushroom’s appearance is very striking, making them easy to find when you hunt for them in the forests. They are also one of the world’s most popular for eating, and that means the prices for them are a lot cheaper than other varieties.

Fact #1: The color is only the beginning

Many other colors of golden oyster mushrooms exist, including pearl, blue, white and pink. While the oyster has varied appearances, their tastes vary significantly. While Golden Oyster mushrooms have a distinct nutty flavor, many compare the taste to cashews and almonds.

Use them in your stews and soups for extra flavor, or enjoy them alone with a bit of butter. They contain a high amount of water, so fry them a little longer for a wonderful crisp shell.

They have an incredibly bright appearance that draws your attention to it. Compared to other colors within the range, the bright yellow is instantly recognizable.

Golden Oyster mushrooms contain many health benefits that are used by people around the world. Although researchers are still playing catch-up to the centuries of experimentation by Chinese medicine, the evidence is growing.

Scientists conduct extensive research to discover the many healing properties that the fungus holds.  They hold high hopes for future possibilities.

The fungus is full of beta-glucans that improve your immune system. The golden oyster doesn’t tip the immune system one way or the other, instead balancing it against long and short-term illness.

It’s also high in antioxidants, which fight a lot of the free radicals within our bodies. Golden Oysters contain important vitamins and nutrients that include-

They may also regulate blood sugar levels and reduce cholesterol levels, as well as aid with high blood pressure. But that’s not all, the list continuing with vast amounts of vitamin D and magnesium to strengthen bones.

The antioxidants and beta-glucans offer protection against inflammation and also may protect against certain forms of cancer.

But why stop there when the golden oyster also fights to protect the heart from cardiovascular disease with Ergothioneine. But that amino acid doesn’t just protect the heart, also protecting cells from oxidative stress which cause many neurological diseases. Did we say health benefits?

If you plan to use the mushroom to help you, never replace your current medications, or substitute them with this fungus. Talk to your healthcare professional and discuss your options. 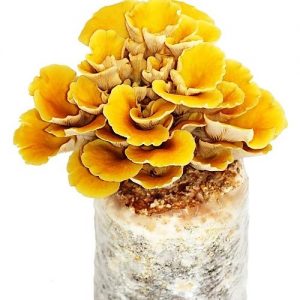 Despite the Golden Oyster mushroom being native to China, Russia, and Japan, you can find them growing in many parts of the world, particularly in many homes. Golden Oyster Growing Kits are hugely popular, thanks to the mushroom’s ability to grow almost anywhere.

If you fancy growing them in more of a unique setting, try the Spore Kit instead. Both options will see you growing your own Golden Oysters in no time.

While other varieties, such as the popular Morel, grow alone, the Golden Oyster prefers company, growing in large clusters that will fill your basket with a single find.

The cluster looks similar to a bouquet of flowers which gives them a wonderful appearance. You can find them growing on fallen hardwood trees such as elm.

Because of their hardiness and ability to grow just about everywhere, Golden oysters grow commercially in many countries around the world. This makes their prices very attractive, given their availability.

With huge numbers of people growing them personally, you too could use the above methods to try them for yourself.

With a straw or supplemented sawdust, they grow easily and quickly, as long as you keep a relatively warm and humid environment for them.

The golden oyster grows smaller fruit than other varieties and you need to be careful when handling the harvested caps once ready for picking. They don’t have a very long shelf life so use them immediately or dry them for later use.

Use the golden oyster mushroom as you would other varieties but be sure to thoroughly cook them through. They have higher-than-normal water content and will need extra time to evaporate the water content out. The final result is well worth the effort, the wonderful nutty flavor a just reward for the time put in.

But frying them up isn’t the only way you can enjoy them, many recipes using the fungus. One of my favorite recipes is to fry the mushroom until it’s quite crispy, then crumble up into pieces and treat them like bacon bits.

The effect is really quite surprising. Their rich nutty flavor works well with so many dishes, including poultry, seafood, and steak.

Stir fry them with regular vegetables or bake them in a tart mixed in with eggs. They make for a wonderful addition when sprinkled over your normal pizza toppings or folded into an omelet. They are versatile enough for you to experiment with, so give them a try for yourself.

Fact #5: They are great for the environment

I always assumed Golden Oysters were limited to what ingredients I added them to. I never realized how versatile they were when it came to the environment.

It took me by surprise to learn that scientists use the mushroom to clean up toxic spills, the fungus has grown on them and drawing the toxins out of the ground.

But not only for toxic spills. The golden oyster mushroom is used for wastewater spills and drawing out pesticides from the contaminated ground.

What makes them even more special is that the mushroom draws the toxins from the ground. They mineralize the pollution they absorb, effectively filtering the earth. The fungus turns the pollution into gas and returns it to the atmosphere as water vapor, chlorine, carbon dioxide and ammonia.

Scientists are actively researching the mushroom’s effects on the environment and hope to develop a biological way to use the fungus in future contamination spills. To think that something we consider a simple ingredient, could one day save the environment from harmful spills.

The Golden Oyster really is remarkable

So many mushroom varieties fill our supermarket trolleys and kitchen pantries. It’s always great to add yet another one that may offer us something new.

They have so many uses in the kitchen alone, yet offer us so much more when you consider their health benefits as well.

With Golden Oysters having so many uses for us, it really boggles the mind when you try and imagine the possibilities of the mushrooms we haven’t researched yet. With tens of thousands of varieties still waiting for us to explore, what secrets will the next one reveal?