Mushrooms are one of the most sought-after ingredients on the planet. It is also one of the few natural foods that foragers still hunt for. Not all mushrooms grow commercially. Commercial growers haven’t had success growing a number of species and the chicken of the woods mushroom is one of them.

Just like morel mushrooms, the chicken of the woods is one of those species that is only found in the wild. That’s why it pays to know what you are looking for, where and when. Mushrooms only grow at certain times of the year, which makes them highly sought after by those keen to enjoy their unique flavors.

But what makes this mushroom so special I hear you ask? For me, it’s one of those exclusive products that mother nature has delivered us, that offers us a quite unique culinary experience. It’s quite popular with vegetarians and not just because of the taste. More on that a little later. Firstly, let me explain just what a chicken of the woods is. 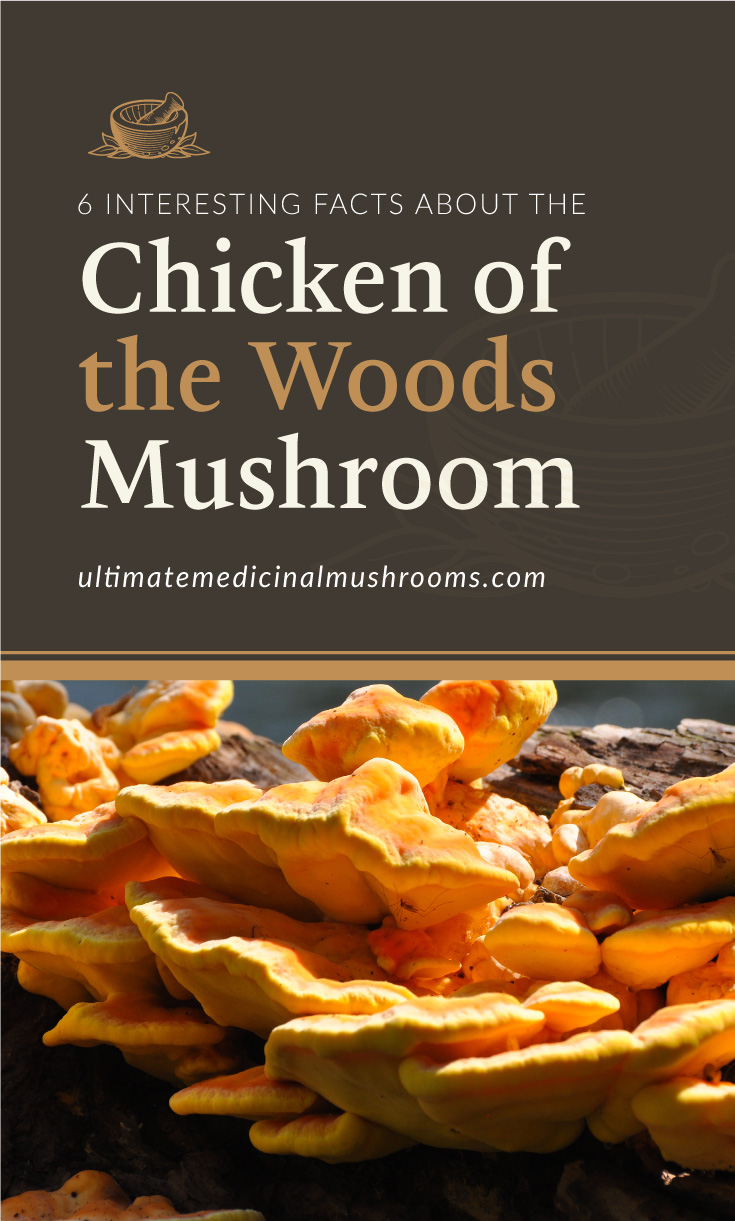 What is the Chicken of the Woods?

The Chicken of the Woods mushroom is a polypore variety that grows on trees, the species described as both parasitic and saprotrophic. What this means is that the mushroom grows on trees, feeding off the host’s nutrients until it dies, then continues to feed off the host as the timber rots.

There are a variety of trees these mushrooms grow on, such as conifer, eucalyptus, oak, cherry, beach and cedar. You’ll find them growing near the base of the trees or a little above. Or if the host has died and fallen over, the mushroom might be growing close to the ground.

The Chicken of the Woods mushroom is found on most continents around the world, a prized delicacy to those lucky enough to spot them. They are quite easy to find, given their bright appearance and because they grow on the trunks of trees, it makes finding them that much easier.

Just be sure to keep your eyes peeled for the bright skin of the fungi. It should be easy enough to spot even through dense undergrowth.

How to Find Chicken of the Woods

As this variety grows in most countries, it’s just a matter of knowing where to look and most importantly when to look. The when part makes all the difference, given most mushrooms have a growing season. For the Chicken of the Woods growing season, it’s all summer long, although you’ll find them from late Spring until early Fall.

Look for a bright yellow-sulphurish to orange color. The skin of the mushroom feels a little rubbery and its worth noting that the skin becomes harder and more brittle with age. There’s no denying that it’s pretty hard to miss one of these mushrooms, growing in multiple brackets, or clusters.

Some Interesting Facts About the Chicken of the Woods Mushroom

Fact #1: Not All are Edible

Just like other foods, some people report having reactions to the mushroom after eating some. It’s not unusual considering there’s plenty of allergies around. Think shellfish, seafood, dairy, sesame seeds, nuts, caffeine and a host of other examples. It’s the same thing with mushrooms.

While some people are fond of white buttons, portobello or porcini mushrooms, other varieties may cause adverse reactions. If you’ve had a negative reaction to other mushrooms in the past, be sure to sample only a small piece to make sure.

Chicken of the Woods have given people gastrointestinal issues in the past and so use common sense before sitting down to an entire meal of this variety for the first time. Adverse reactions include sore throat, swollen lips, vomiting and diarrhea.

Fact #2: Watch Where They Grow

Always take note of where you find the chicken of the woods growing. They always grow on the stump or trunk of both living and dead trees, given their parasitic tendencies. But it’s the host trees that may hold the adverse reaction and not the mushroom itself.

Fact #3: The Chicken of the Woods Tastes Like Chicken

Hard to believe, I know, but these mushrooms actually taste like the very thing they are named after. People have played tricks on friends in the past, serving up crumbed mushroom fingers and asking the party members if they recognize what they are eating. People often mistake the chicken of the woods mushroom with real chicken.

Both the taste and the texture are similar to the bird, which gives this fungus a head start when it comes to vegetarians. Those missing their meat intake use this mushroom variety as a kind of cheat meal. They also have a hint of lemon about them, the two tastes a classic combination already in many households.

The individual brackets, or shelves, grow anywhere from 2 to 10 inches across, although some grow much larger. Some foragers report finding some clusters weighing upwards of a hundred pounds, making them a true prize to find.

Fact #5: They Absorb Their Environment

As with any mushrooms found growing in the wild, always watch where you find them. Mushrooms are environmental sponges and absorb anything and everything from the environment around them.

If you find them close to blackberry bushes recently sprayed with pesticides, chances are that the mushroom will absorb those harmful chemicals. Take note if they grow near refuse centers, chemical storage facilities, factories and other industrial centers.

Fact #6: Grow Them Yourself

The Chicken of the Woods is one of the many varieties people grow themselves. Check out some of these grow kits and consider starting your own chicken farm experience. Growing mushrooms by yourself is a wonderful hobby that can quickly evolve into a full-blown obsession.

Grow kits make wonderful educational tools, teaching both adults and children about these wonderful organisms. There’s also the fact that many of these kits look great as ornaments.

Fact #7: They Have a Worthy Nutritional Profile

For vegetarians looking for a good source of protein, or anyone needing a decent protein boost, the chicken of the woods contains approximately 14% protein per serve. That’s 14g per 100g of mushroom meat.

They are also cholesterol-free and contain high levels of antioxidants, making them perfect for anyone looking to boost their immune system, particularly after recovering from sickness.

Chicken of the woods, like most mushrooms, also contains a formidable amount of both vitamins and minerals, including copper, potassium, magnesium, zinc and various B vitamins.

This is one of the few mushrooms that don’t have a toxic cousin to confuse with. It’s relatively easy to locate and abundant in taste, size and benefits. It’s one of my personal favorites and I often look forward to the early onset of summer so I can go hunting for them. If you have the time, I hope you’ll give the chicken of the woods a try.