When it comes to the types of edible mushrooms, many people enjoy them for a huge number of reasons. This includes everything from adding them to a favorite dish, as a standalone meal, or for their many health benefits.

But while there are thousands of varieties of mushrooms, some edible mushroom types are more sought after than others. These are the ones many people find in their local fresh-food grocer or supermarket. Not all mushrooms are in such high demand. For this reason, people harvest only certain varieties to meet demand.

This article is about the many mushrooms grown on farms, to meet the high demand of consumers. There’s another article here, that shares the many wonderful varieties people forage for. Mushroom hunters often spend countless hours searching, desperate to find them. 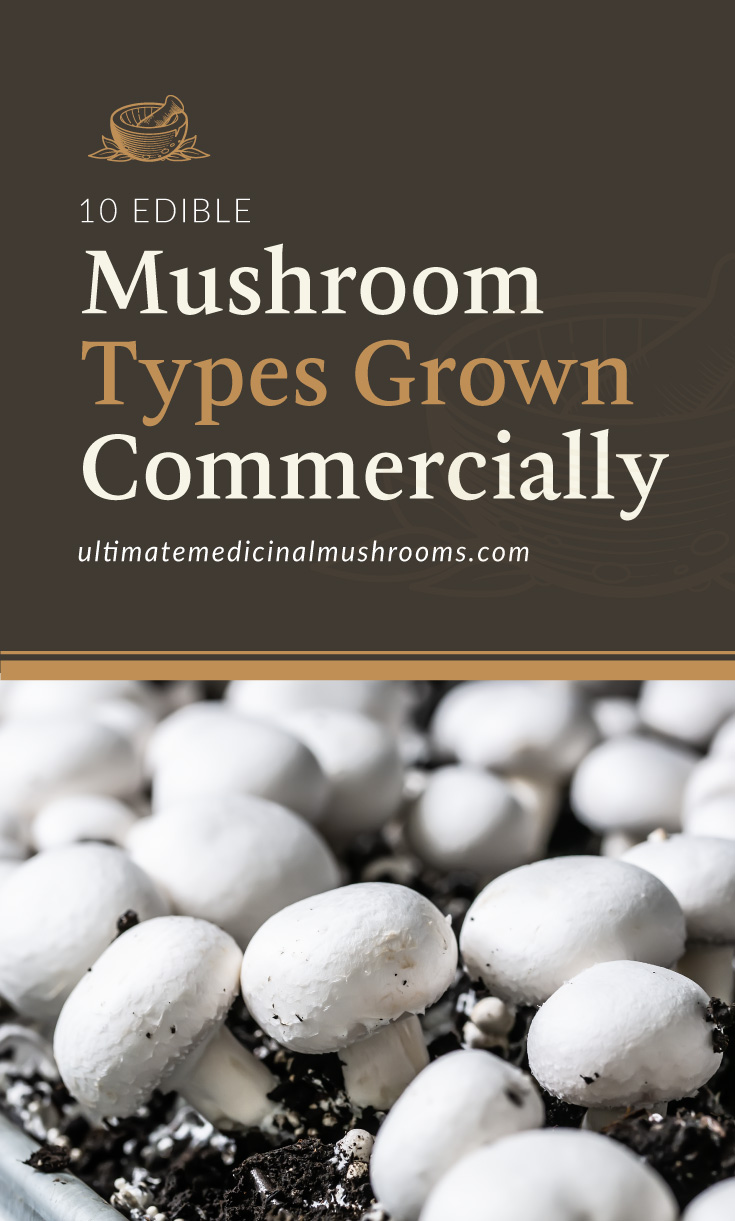 Why Commercial is Better

Others say wild mushrooms contain more nutrients. The fungus is more loaded with the beneficial vitamins and minerals many people use for dietary supplements.

But the other side of the argument is just as valid. Commercially grown mushrooms are much safer to eat. There’s no chance of an uninvited toxic varieties mistakenly showing up in a crate of mushrooms. The commercial varieties grow in controlled conditions and are monitored for their entire lives. Farmers take great care to deliver quality goods.

There’s also the question of toxic contamination in wild-grown mushrooms. The mushroom hunter takes a big risk picking a mushroom from an unknown location. There’s no knowledge of what substances have leaked into the ground. Commercial varieties grow on a pre-determined substrate that’s monitored and cared for.

Then there’s availability. A lot of wild-grown mushrooms depend on seasonal climates, others not growing in abundance. They are hard to find and this drives their price up.

Why Edible Types of Mushroom Are so Popular

Just because a mushroom is edible, doesn’t mean its only purpose lies in the pantries of our kitchens. The number of edible mushroom types that have more than one use is staggering when compared to other kitchen ingredients.

A staple food ingredient is one of the fundamental uses of mushrooms. Their many profound health benefits also feature in many other products. Healthcare professionals the world over know how healthy this organism really is, using it for many treatments.

Western researchers are also now devoting more time to the fungi kingdom, aware of the beneficial nutrients they contain.

Many herbal treatments feature mushroom varieties. Products include capsules, powders, tinctures, and dried varieties. It’s easy to see why they are so popular, people looking for help with everything from weight loss to chronic conditions.

The world’s most commercially-grown mushroom is the white button mushroom. The white button was first grown domestically back in the 1650s. Since then, it has grown in popularity around the world.

The mushroom is one of the most versatile, even served raw in salads because of its mild taste and crisp texture. When fried, the mushroom builds a wonderful earthy flavor, particularly popular when fried crispy.

Another reason this edible mushroom type is so popular is that it is so easy to grow. This gives commercial growers quite an easy crop to work with. Buttons are also one of the cheapest mushrooms to buy, making them popular in many kitchens. They feature in many recipes and remain a popular choice for chefs. 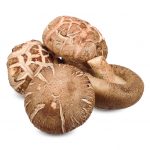 The second mushroom is the Shiitake, which originally grew predominantly in China and Japan. Having quite a woodsy taste, the mushroom’s flavor is very popular in many Asian dishes.

But the dried variety is also popular, because the flavor intensifies significantly with its water content removed. Shiitake mushrooms are popular as meat-toppers and used extensively in soups and stews. This mushroom is also popular to grow at home. 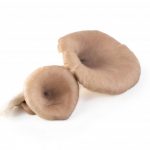 One of the most popular mushrooms in the world are Oyster mushrooms. They grow mainly on fallen hardwood logs; tree mushrooms another name for them.

They grow in a variety of colors, each harboring a different taste. While the white oyster is one of the more popular variety, others include pink, blue, black and gold.

Oyster mushrooms feature in many Asian dishes, particularly stir-fry’s, and are also very popular with vegetarians, because of their fleshy texture.

They have more of a sweetness to them, making them popular to sauté or when added to stir-fry dishes. The oyster mushroom is also popular when grown at home, many grow-kits available online.

Cremini shares a unique relationship with the first mushroom on our list. They are a grown-up version of white button mushrooms. White Buttons, Cremini and Portobello mushrooms are technically the same mushroom, just at different stages of their growing cycle. Cremini mushrooms and white buttons are interchangeable because they have a very similar taste.

What’s great about creminis is they mix easily with other varieties when combined in a dish. Their flavor isn’t too overpowering and they are best used when roasted or pan-fried. 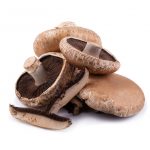 Either fresh or canned enoki mushroom is very popular in many Asian dishes. They are one of the smallest edible varieties and should be firm and shiny when chosen. They have a mild earthy flavor, often served in soups because of their crispy texture, which holds up to the high water content of the dishes.

This type of edible mushroom looks like cabbage when seen in its cluster form. They have a stronger flavor than most other varieties, often described as gamy. Other names include the hen of the woods and sheep’s head mushroom.

Also known as the Paddy Straw Mushroom, this variety is very popular in Asian cuisine. Although not as popular in western cuisine, this is actually the third-highest cultivated mushroom in the world. They grow on rice straw beds, giving them their name. They have a distinct aroma when cooked and are commonly canned for use in countries outside of their cultivation.

This mushroom looks like an ear when seen growing on trees. It’s very common in Chinese cooking, featuring in dishes like hot and sour soup. It doesn’t have a pronounced flavor, which is why it’s so popular in many Asian dishes.

The mushroom isn’t overpowering and sits well in the dishes it’s served in. Because of the mushroom’s jelly-like texture, it’s never been overly popular outside of Asian countries. . The Jelly Ear is more popular in Asian dishes than Western ones.

The porcini mushroom has a similar texture and appearance to portobello mushroom. But the porcini has a different flavor, often described as a bit nutty and meaty. The aroma sets the two apart, the porcini smelling like freshly-baked sourdough when pan-fried or baked. 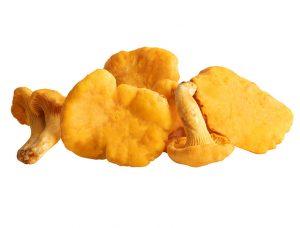 Because there are several different types of Chanterelle mushrooms, not all are commercially cultivated. Some are only found in the wild and demand very high prices, similar to truffles and morels. But the commercial varieties are still a popular mushroom in many kitchens.

They taste slightly nutty when cooked and because they contain many fat-soluble compounds, they are most popular when pan-fried in butter. They are a common mushroom in both Europe and North America, often used as inclusions in stews and soups.

The mushroom has a very high water content, which makes them suitable for drying. The process intensifies their flavor slightly, making them perfect for powdering and used in soups and casseroles.

This list is a small sample of all the edible mushroom types that grow around the world. White button, shiitake, and oyster mushroom varieties command over 70% of the world markets. Many lesser-known mushroom varieties continue to grow in popularity. Many smaller farming operations are building up demand for their products, which is a good sign of the rising popularity of the mushroom industry.

With researchers discovering the many health benefits in mushrooms, adding them to people’s daily diet is one method scientists can help reduce many chronic diseases and conditions.

With so many different types of edible mushrooms, the mushroom industry continues to grow annually. By making more varieties of mushrooms available for us, we can all benefit from the many incredible benefits they contain.

But remember, commercially-grown varieties are just one side of this incredible variety. You can also read about the edible mushrooms found in the wild in this article.