There are 2 ways to get your supply of mushrooms. The first is to go to your local fresh food grocer or supermarket and buy them. There are many types of edible mushrooms available from stores, their prices often determined by availability. There’s an article here that describes the commercial varieties in more detail.

But what about the edible types of mushroom not found in the shops? There are many that never make it on to the shelves, because people can’t grow them commercially. Local restaurants rely on mushroom hunters to go into the wild and find them. That’s why many of the names on this list are very popular with mushroom lovers. 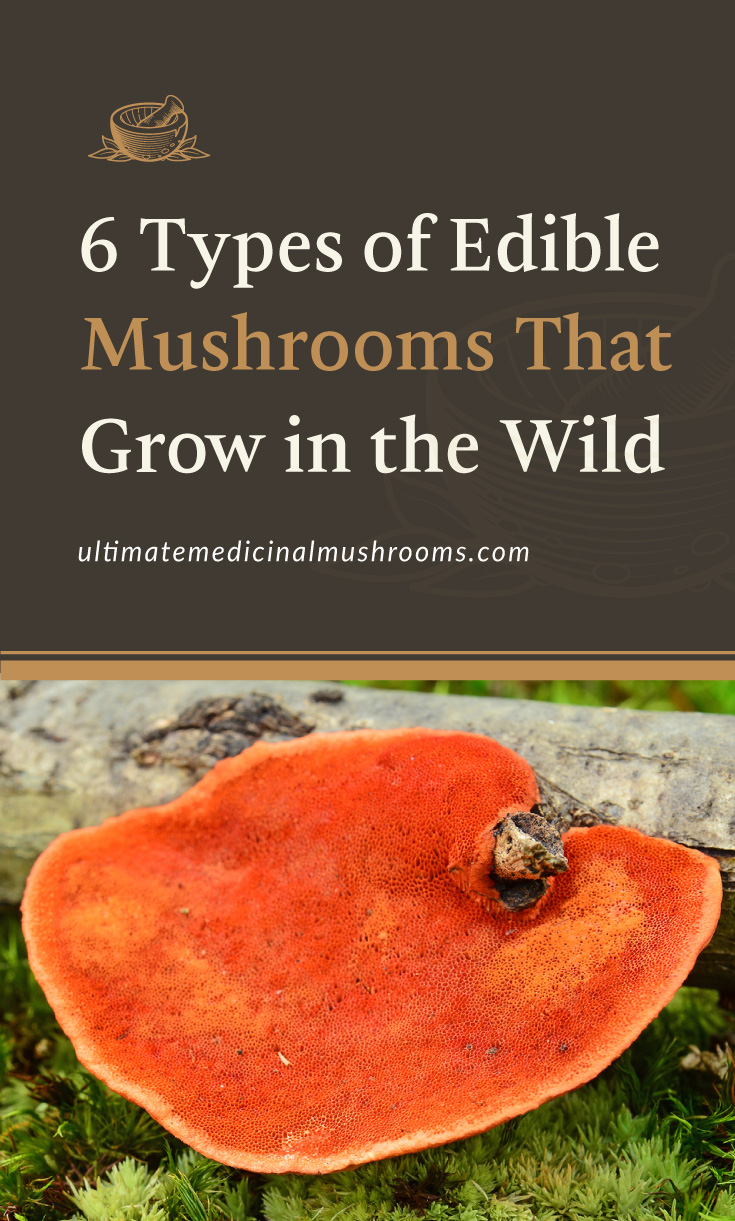 Mushrooms are part of human history, popular for both food and medicines for thousands of years. People grew them domestically and used them for their incredible health benefits in many different forms.

Why is Mushroom Hunting so Popular?

When I think back to my childhood, I remember spending countless hours following my grandmother around the hills and forests around our home. We would trek for what felt like an eternity, carrying our mushroom baskets and knives with us as we searched high and low for the best edible types of mushrooms.

Each time I found one, my grandmother would first inspect it, then give me the nod to proceed. It was important for her to check each mushroom I found, because of the bad ones. That’s what she called them; the bad ones. The toxic intruders that tried to mask themselves as edible ones.

What drew me to mushroom hunting was pretending to be a boy living hundreds of years ago. I would imagine that we lived alone, in an old hut and needed to find our food. I think it’s the connection to that reality that keeps pulling me back.

Heading outdoors with nothing more than a basket and mushroom knife is like returning to a world that time passed by. We used to rely on mushroom hunting for our daily sustenance. I think mushroom foraging is a way for us to connect with our ancestors. But unlike what those people went through, we no longer need to take chances when mushroom hunting. There is a ton of research to help us know the safe mushrooms from the bad ones.

Watch Out for the Toxic Varieties

There are many toxic varieties of mushrooms around. Not even I know all of them. But while I might not know all of the poisonous mushrooms that exist, there are certain precautions I take to protect me and my family from them.

While there are articles about toxic mushrooms already on my website, I want to share a couple of important points with you. More so as a cautionary bit of advice. If you take nothing else away from this article, please remember this.

“If in doubt, throw it out.” Those words were spoken to me by my grandmother more times than I can ever remember. They are the words I still live by today, whenever I go out foraging. If you ever find a mushroom that you are not 100% certain about, throw it away.

The risks associated with toxic mushrooms range from mild reactions to death. Whenever I associate with something that could kill me, I avoid it like the plague. The risk isn’t worth it. Don’t ever risk your life for the sake of a tasty meal.

There are also many toxic mushrooms that resemble popular edible varieties. Be absolutely sure that you have the real thing before eating it. One of the more common varieties that’s often mistaken is the morel. Morels are one of the world’s most prized mushrooms, keenly sought after by many mushroom hunters. But they have a close cousin that looks very similar.

The false morel is quite hard to tell apart from a true morel. Check out my article on morels and you will find an entire section devoted to explaining how to tell the difference. Whenever you doubt the real thing, throw it away.

The Types of Edible Mushrooms Found in the Wild

There are so many varieties of mushrooms that exist in the wild, that I could write non-stop for the rest of my life and not mention them all. So, in this article, I’ll name some of my favorites for you to check out. Hopefully, you will find some of these beautiful varieties the next time you head out into the fields and forests.

If you do happen to head out and end up coming home with an empty basket, remember that mushroom hunting takes a lot of patience and even more persistence. It’s a huge forest out there. Mushrooms grow in some of the best hiding spots ever discovered. I’m sure you’ll eventually fill your basket to the top. 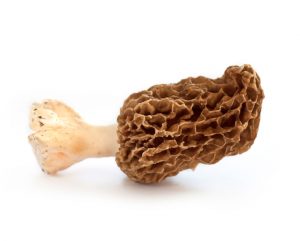 I don’t think any list of wild mushrooms could ever begin without a morel at the top. It is, after all, one of the world’s most sought-after delicacies. Restaurants pay huge amounts of money to active foragers who spend their days hunting this fungus.

Morels grow in the temperate climates of the Northern Hemisphere, namely North America, Asia, and Europe. If I was to try and describe the taste to you, I’d say imagine a concentrated portobello mushroom, but intensified. Their flavor is not only unique, but also addictive. Take it from me.

I do have a couple of articles about how to treat the mushroom once you have some, as well as how to properly clean it and cook it. But always cook the morel thoroughly before eating it. They contain a certain level of toxins that are broken down during the cooking process. 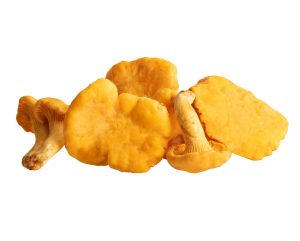 They have a mild peppery flavor that is perfectly paired with other ingredients, giving the dish a nice balance. The golden chanterelle isn’t too hard to find either, growing in soil with bright caps that are easy to spot.

Chanterelles have a closely-looking cousin called the Jack O’Lantern. It’s not as toxic as some other varieties, but I still recommend against trying them. The good thing about Jack O’Lanterns is that they grow on logs and fallen trees, instead of the ground. 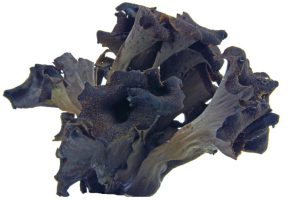 These mushrooms have a strange moniker, often called the “trumpet of death” But they are not toxic to humans and actually taste very delicious. They are similar to chanterelles, but in addition to the peppery taste, add a certain smokiness to their dishes.

What I will say about these, is that they are hollow inside, which makes them very popular for any stray insects looking for a nice home. Be sure to clean them thoroughly before adding them to any dishes. 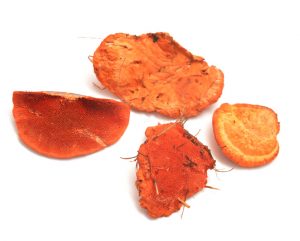 Technically a Chanterelle variety, this type of edible mushroom is very popular because of its size and color. They grow much smaller than regular golden chanterelles, only around an inch or two. But their color is truly striking, ranging anywhere from a bright pink to an orange bright enough to blind.

The flavor of cinnabar is light and mild, not as peppery as the golden chanterelle. They also grow on the forest floor, which makes finding them that much easier. A young girl who once accompanied us on a mushroom hunt described them as looking like little forest fairies. 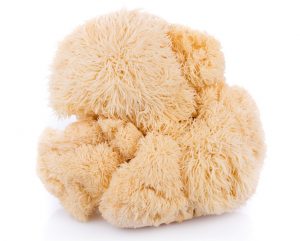 The Lion’s Mane mushroom is another type of edible mushroom that’s found growing on trees. They are one of the few varieties of mushrooms that require you to look up, not down. That is because they grow high up, normally in the branches of decaying trees.

But once you’ve scaled that 30-foot tree and successfully cut a specimen free, you’ll be glad you did. They make for an excellent meal and taste quite earthy. But taste isn’t the only reason people actively hunt Lion’s Mane mushrooms.

The list of ailments and conditions that this mushroom helps with, reads like a list of who’s who in the medical world. We’re talking heart health, cancer, immune system, cognitive health, depression and diabetes. 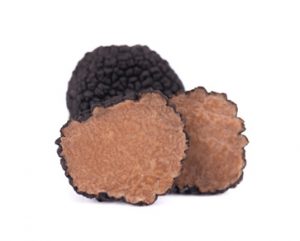 Whenever I hear the name truffle, my mouth instantly starts to water. Because of its very low availability, truffles command some of the highest prices of any mushrooms. They are hard to find because they grow mostly underground.

They have a very delicate flavor, highly sought after by chefs the world over. Truffle farming is a very lucrative business, but take many years to mature. People often use dogs to smell out the mushroom, keen to get their hands on such a prized find.

Things to Take Away

Edible types of mushrooms, whether found in the shop or out in the wild, are one of nature’s true superfoods. Their flavors are often highly sought after and their many health benefits are known the world over.

But unlike the varieties that you find in the shops, wild mushrooms aren’t always the wisest produce to hunt. There’s a certain element of risk and that is why I implore you to fully identify any mushroom you find before eating it.

Many mushrooms contain a certain level of toxins, although some don’t contain enough to hurt us. Others have toxins that break down during the cooking process, so always cook any mushroom you find thoroughly.

Hunting edible types of mushrooms is a true passion of mine, so I will always encourage anyone to try it. But I also encourage people to always exercise caution, especially when hunting for some of the lesser known varieties. Stay safe out there.