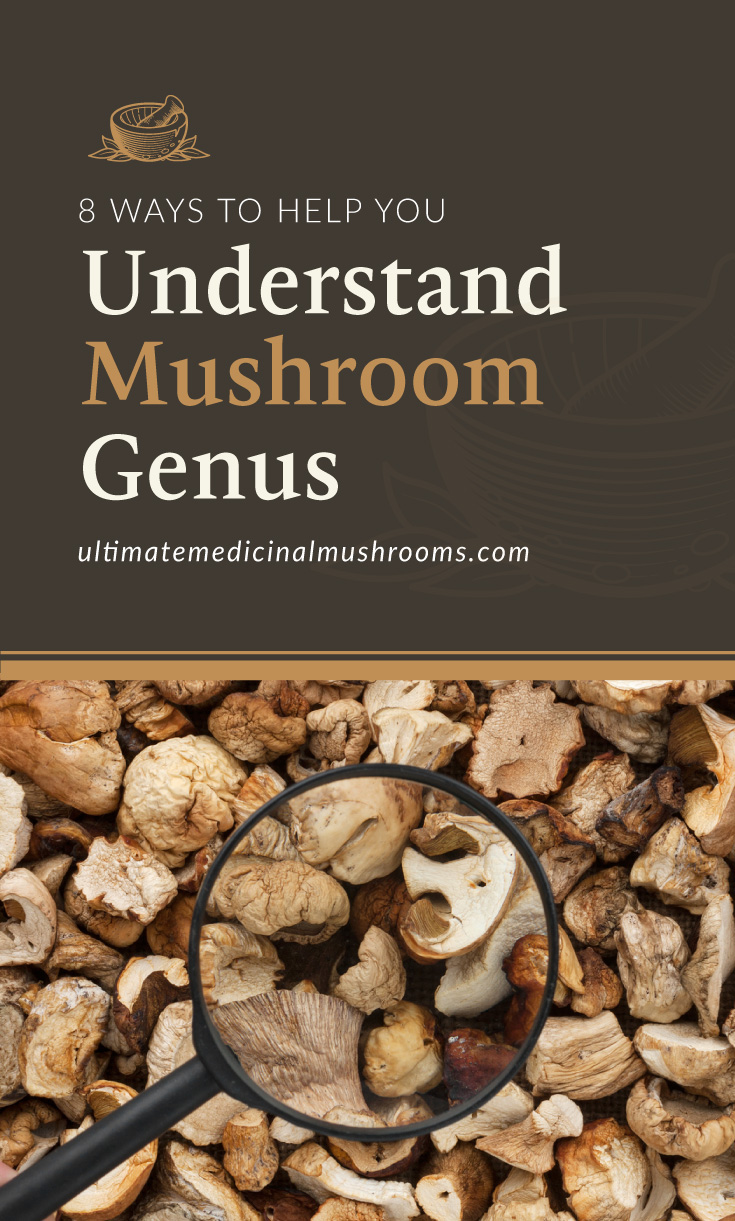 I remember high school like it was yesterday. There I was, sitting in science class, the only kid interested in the mushroom genus the teacher was trying to explain. Was I the nerd of the class? Not likely. But anytime anything about mushrooms was taught, my ears pricked up like a dog called for dinner.

One topic that always interested me was that of Genera. To understand what that is, think of how you would classify the difference between gorillas and chimpanzees.

While both animals, like humans, belong to the animal kingdom, differences between all 3 will separate them further into sub-classes the more things you compare.

Without getting too technical, every step of the classification process takes something else into consideration, until you eventually reach the seventh level, the species. Mushroom genera number in the thousands, with names that you’re no doubt familiar with, including Morel, Chanterelle, White Button and many more.

Why is Mushroom Genus So Important?

While there are seven levels to properly categorize every living thing, when you get right down to the nuts and bolts, i.e. the species, the differences between certain organisms might be so minute that looking at them won’t help identify them. For that, you might need a microscope.

When it comes to mushrooms, the genus of each mushroom is at a level where identifiable parts are clearly visible. This eliminates mistaking the edible mushrooms for toxic ones. While on the subject of toxic mushrooms again, there’s a handy piece of advice I learned a long time ago.

If you’re going to spend any time studying mushrooms, get to know the ones that will kill you first. That way you’ll still be around to look for the edible one.

The idea here is to go through a checklist of things to help you properly identify varieties of mushrooms. In time, you’ll be able to see what they are with just a quick glance, but until that day comes, take your time and get to know which key points to check.

Edible mushroom genus to look out for will be different from toxic varieties. That’s what gives you the upper hand.

Eventually, once you’ve given yourself enough time, the mushroom genus and species name will be permanently etched into your mind. Use the following mushroom identification list to narrow your mushroom down to its genus and understand what makes it so unique.

Normally the first thing you see when it comes to finding mushrooms. Look at the color and see if there are any distinctive markings. Take in its shape and see how it’s connected to the stalk. The cap is one of the mushroom’s dominant features and will give you a lot of useful information.

The gills of a mushroom sit on the underside of the cap and are the next thing to check out. Do they attach directly to the stalk? Does the mushroom even have gills?

Next, we have the stalk. Normally sitting directly under the cap, compare its size, as well as its color compared to the cap. Is the stalk attached directly to the cap? Checking the stalk, cap and gills are three great ways to identify a mushroom variety.

Some mushrooms will grow on the ground, while others attach themselves to trees. The trees might be alive, or might be dead. The ground might me grass, moss, muddy or dry. Do they grow in a cluster or alone? A lot is said about where you find the mushroom.

There are distinct seasons for each variety of mushrooms. While some seasons may overlap, it’s great to use all the previous indicators and add them together.

This test might take a little longer than all the rest, but it is still one that works really well. Mushrooms shed spores; that’s how they spread their seed. That’s why it’s great to carry your mushrooms in a basket, so the spores can drop to the ground as you walk.

Put your mushroom on a sheet of either light or dark paper (this will depend on the mushroom as some have dark spores and others light spores) and cover it with a bowl or bucket. After a few hours, check the spore color.

With this test, I strongly urge you to only do this sparingly, and not with mushrooms you believe are toxic. Smell the mushroom and see if you detect any specific aroma. Then taste a very small sample of the mushroom. Is it bitter, fruity or pungent?

By using these 8 identifiers, you’ll notice a lot more about the mushrooms you encounter. The more often you use them, the easier they become, eventually turning into your standard method of mushroom identification.